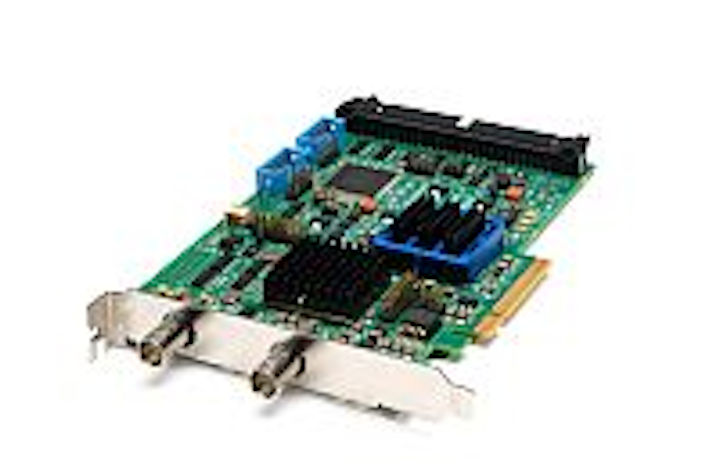 Originally developed by a consortium of companies including Adimec (Eindhoven, the Netherlands), Active Silicon (Iver, UK), and Components Express (Woodridge, IL,USA), the CoaXPress standard has now been officially endorsed by the Automated Imaging Association (Ann Arbor, MI, USA) and the European Machine Vision Association (Frankfurt, Germany). With the benefits of 100-m camera-to-computer connectivity coupled with 6-Gbit/s/channel speeds, the CoaXPress interface is positioned to allow system developers the flexibility of Gigabit Ethernet cable distances while attaining speeds close to that of Camera Link (Full).

Recently, support for the CoaXPress standard has gained momentum with three camera companies and four frame grabber vendors now offering products (see figure). Not surprisingly, the first of these products has been developed by founding members of the consortium. Adimec, for example, now offers a range of 1- to 8-Mpixel cameras in its Opal Series that vary in speeds from 123 to 16 frames/s. At SPIE’s Defense, Security + Sensing show, held in April 2011, Imperx (Boca Raton, FL, USA) also announced a family of cameras based on Kodak’s CCD imaging sensor family that incorporates the CoaXPress interface.

A number of vendors now offer boards that allow multiple cameras to be interfaced to a PC using single add-in boards. First to announce such a product was Active Silicon, whose PHX-CXP series of add-in boards uses a CoaXPress mezzanine board interface mounted on the company’s Phoenix frame grabber to allow two CoaXPress cameras to transfer data to the host PC.

At Automate 2011, held in Chicago in March, the company announced its next-generation CoaXPress interface board known as the FireBird FBD-4XCXP6, a single-board x8 (Gen 2) PCI Express board that allows data to be captured over four 6.25-Gbit/s CoaXPress channels.

Active Silicon has chosen to implement connector indicator lights (as specified in part 5.4 of the CoaXPress specification) onto the board. These indicator lights are used to help system developers understand how a system is performing, according to Chris Beynon, technical director at Active Silicon.

Mounted on each CoaXPress channel on the Firebird board, these LED lights indicate whether the system is booting, link detection is in progress, data are being transferred, or there has been an error during data transfer.

While Active Silicon is the only vendor to implement these indicator lights, other manufacturers such as Avaldata (Tokyo, Japan), BitFlow (Woburn, MA, USA), and Silicon Software (Mannheim, Germany) all offer CoaXPress interface boards that differ somewhat in support for multiple channels, Power over CoaXPress (PoCXP), and their PCI Express interfaces.

For example, while it supports four channels of CoaXPress data, the APX-3662 from Avaldata uses an x4 (Gen 2) PCI Express interface. Interestingly, the board also features support for on-board CoaXPress output from an RX connector or Camera Link output from the company’s separate PSM-3318-02 board. Rather than offer a single board, BitFlow has announced three boards, known as the Karbon-CXP Series, that support one, two, or four channels. All of these boards use an x8 PCI Express interface, support PoCXP, and, according to Reynold Dodson, president of BitFlow, have been tested using the 1920 × 1080-pixel Opal 2000CXP camera from Adimec running at 60 frames/s over distances of 50 m.

For its part, Silicon Software demonstrated a CoaXPress prototype at VISION 2010 that features four CoaXPress connectors. This prototype uses a CoaXPress mezzanine board interface mounted on the company’s microEnable IV board to transfer image data to the host computer. According to Michael Noffz, head of marketing with Silicon Software, the company may develop a single-board implementation later this year.

Also looking to enter the CoaXPress market, Matrox Imaging (Dorval, QC, Canada) is currently developing a single four-channel x8 PCIe Gen2 board that will be based around its current Radient frame grabber line.

Using IC transceivers from EqcoLogic (Brussels, Belgium), these CoaXPress interface boards and cameras allow the transmission of data from a single camera at up to 6.25 Gbits/s per channel. For cameras with data rates exceeding 6.25 Gbits/s, four links can be concatenated to provide data rates of 25 Gbits/s. While this is possible, however, no camera manufacturer has announced a camera that supports such data rates using multiple CoaXPress outputs.

Learn more about CoaXPress in this video from VISION 2010