Because most camera vendors currently offer products based on imaging sensors from well-known companies, it has become increasingly difficult to differentiate between cameras based on sensor technology alone. Recognizing this, camera vendors are now looking to customize their product offerings by forging partnerships with less well known CMOS design houses. 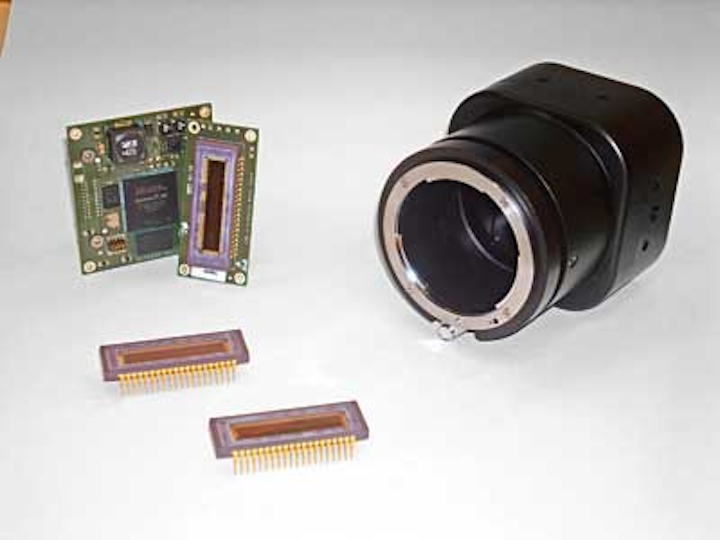 Nowhere was this trend more evident than at Automate 2011, held in March in Chicago, where camera vendors showed new models based on various CMOS imagers. As one of the first camera suppliers to endorse the Camera Link HS standard, Mikrotron (Unterschleissheim, Germany) demonstrated its latest EoSens 4CL HS high-speed camera based on the AM41, a 2336 × 1728-pixel CMOS imager from Alexima. Capable of running at 500 frames/s at full resolution and 1000 frames/s in 1920 × 1080-pixel high-definition mode, the camera’s Camera Link HS standard allows images to be transferred to a host computer at 2.1 Gbytes/s. At Automate, a demonstration showed the camera running at 50 frames/s with images being captured by a microEnable V frame grabber from Silicon Software (Mannheim, Germany).

Other camera vendors—most notably Adimec (Eindhoven, the Netherlands) and Point Grey Research (Richmond, BC, Canada)—chose the show to highlight their latest area-array cameras based on imagers from CMOSIS. Adimec has chosen Camera Link as the interface for its Quartz Qs-4A40 and Qs-2A80 featuring the CMOSIS CMV4000 (2048 × 2048-pixel) and CMV2000 (2048 × 1088-pixel) sensors and deliver up to 90 and 170 frames/s, respectively. While Point Grey uses the same imagers and camera interface in its Gazelle Camera Link series, its 2.2-Mpixel model is specified to output 2048 × 1088-pixel resolution images at a maximum rate of 280 frames/s; the 4.1-Mpixel model is specified at 150 frames/s.

Just as area-array camera vendors are looking to integrate the latest CMOS imagers into their sensors, so too are manufacturers of linescan cameras. At the VISION 2010 show in Stuttgart, for example, Takenaka Systems (Kyoto, Japan) showed its TL-16000CL, a 16k × 1-pixel, 35-kHz Camera Link camera based on the Dragster linescan CMOS imager from Awaiba (see “Linescan cameras target flat-panel inspection,” Vision Systems Design, February 2011).

At Automate, AnaFocus introduced a very different type of linescan imager that allows developers to trade off the amount of illumination and speed required in their applications. The LS4k linescan imager incorporates two pixel arrays on a single piece of silicon (see figure). The first is a 4k × 5-pixel imager with 7-μm pixels; the second is a 2k × 5-pixel image sensor with 14-μm pixels.

In low-light-level linescan applications, pixel binning of up to five vertical pixels in either sensor increases the signal-to-noise ratio from 54 dB using a 2k × 1 to up to 61 dB using a 2k × 5. Camera designers can offer 2k or 4k linescan cameras using single LS4k linescan imager. Selective sub-sampling of horizontal pixels allows the imager to be clocked as fast as 100 kHz. Effectively operating the devices in a number of different modes allows the developer to selectively trade off web speed and the amount of illumination that is present. The LS4k linescan imager incorporates on-chip several types of programmable optical corrections (such as PRNU, DSNU, flat-field corrections, and LUT), ensuring optimum image quality in a simplified camera design.

At Automate, the company showed a reference design of a camera based on the imager. According to Rafael Romay, general manager of AnaFocus, the imager forms the basis for the latest linescan CMOS camera from JAI (Copenhagen, Denmark), which was also introduced at Automate. Although at present it is only offering a grayscale imager, AnaFocus is working on a color version of the device. The company also is planning to introduce a number of high-speed CMOS area-array imagers later this year.