During the production of glass and plastic products, molten glass or plastic polymers are molded, thermoformed, or extruded to form the final product. 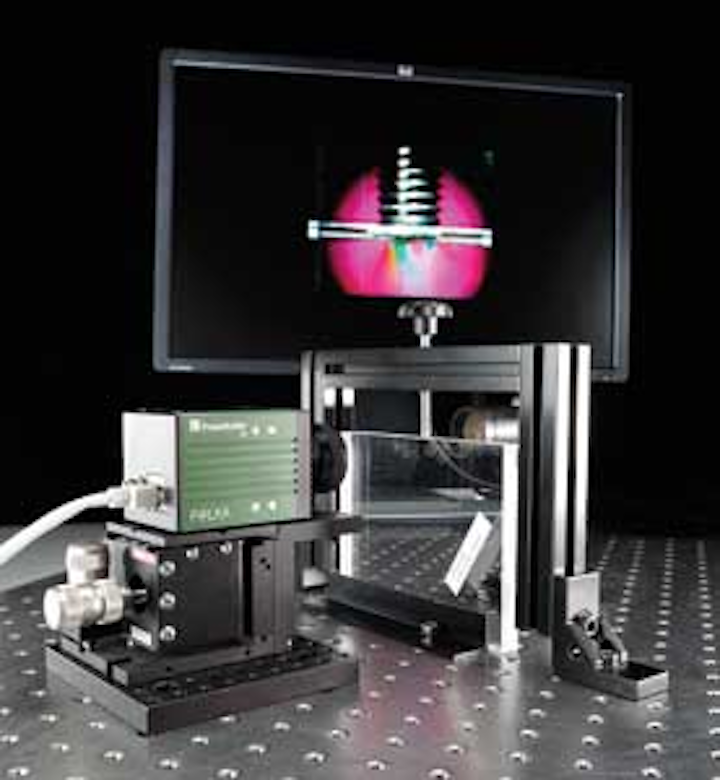 During the production of glass and plastic products, molten glass or plastic polymers are molded, thermoformed, or extruded to form the final product. While this process is underway, inconsistent cooling rates, contaminants, or mechanical handling systems can introduce stress into the parts. This can reduce the quality of the formed product and result in an increased number of scrap or rejected parts.

By measuring this stress during the production process, manufacturers can identify and reduce the potential sources of the stress. Today, the analysis of stress is performed by instruments known as polariscopes or strain viewers. The object is illuminated with a white-light source fitted with a polarizer.

When polarized light passes through the plastic or glass, the light separates into two wavefronts, each of which travel at different velocities. By rotating a second polarizing filter known as an analyzer in front of the object, the components of the two light waves that pass through at any given angle of analyzer rotation interfere, resulting in a color spectrum. This color spectrum can then be used to measure the amount of stress within the object since each color band correlates to the degree of stress in the product being viewed.

In industrial environments, the ability to detect such stress can aid production monitoring, design optimization, and final product inspection. Though illuminating an object with polarized light may be relatively easy, the process of rotating a polarizer in front of a camera to capture the stress pattern is more challenging.

Recognizing this, researchers at the Fraunhofer Institute for Integrated Circuits (Erlangen, Germany) have developed a camera dubbed Polka that uses a custom sensor to replace the analyzer used in conventional polariscopes (see figure). A conventional CMOS image sensor of 1120 × 512 pixels is overlaid with a 2 × 2 matrix of polarizing filters. These pixel-based filters sample the incoming polarized light that is passed through the object being inspected at 0°, 45°, and 90°, respectively. The output from the fourth unfiltered pixel is used to compensate for crosstalk that occurs between the channels of the 2 × 2 pixel array.

Because the filter array is oriented at three different angles, mechanical rotation as seen in previous polariscopes is eliminated. This results in a camera with a 560 × 256 super-pixel imager that can be used to directly measure the polarization associated with the stress of an object.

To calculate this stress, the amplitude of the voltage of the electric field at each pixel orientation is measured. By measuring these amplitudes, the state of polarization of the wave can be calculated using Stokes parameters. Once calculated, the output is color-coded to produce a color pattern that maps the stress of the object under test.

With a dynamic range of 55 dB, the Polka camera can operate at speeds as fast as 250 frames/s. Captured images are then dynamically color-coded in the camera, transferred over a Gigabit Ethernet interface and displayed.

To date, according to Wladimir Tschekalinskij of the Fraunhofer Institute for Integrated Circuits, while the Polka camera can only display relative stress levels within an object, absolute measurements of stress could be made in software. Fraunhofer will not make the camera commercially available, but the institute is currently looking for licensing partners to commercialize the technology.