Amazon's Robotics Picking challenge tasked entrants with the job of building a robot that can do the same as an Amazon stock picker. 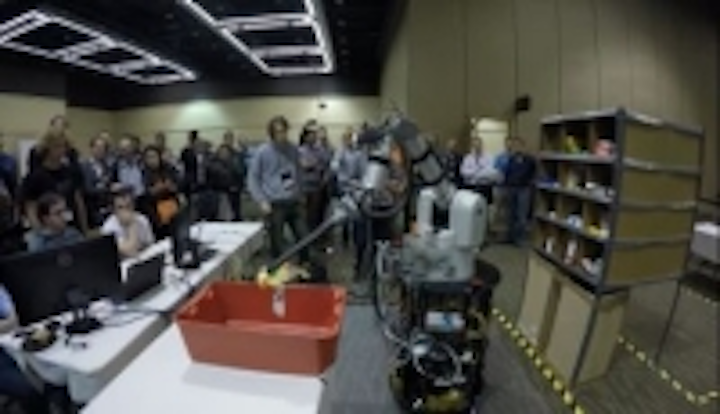 Held at the 2015 IEEE International Conference on Robotics and Automation in Seattle, WA, USA, Amazon’s firstRobotics Picking Challenge tasked entrants with the job of building a robot that can do the same as an Amazon stock picker.

Amazon leverages cutting-edge advances in technology in order to quickly package and ship millions of items to customers all over the world. The company’sautomated warehouses are able to remove much of the walking and searching for items within a warehouse, but commercially viable automated picking in unstructured environments still remains a difficult challenge, according to Amazon. In order advance this technology, Amazon held the Amazon Picking Challenge, which had a goal of strengthening "the ties between the industrial and academic robotic communities and promote shared and open solutions to some of the big problems in unstructured automation."

In the competition, 31 entrants were challenged to build their own robot hardware andsoftware that can attempt simplified versions of the general task of picking items from shelves. The robots were presented with a stationary lightly-populated inventory shelf and were asked to pick a subset of the products and place them on a table. The robots needed to be able to perform object recognition, pose recognition, grasp planning, compliant manipulation, motion planning, task planning, task execution, and error detection and recovery.

Entrants were able to usehumanoid robots or other robots of their choice, and for contestants who were unable to bring a robot, Amazon was able to provide PR2 robots from Clearpath Robotics at the competition to use as a base platform. The robots were scored by how many items are picked in a fixed amount of time, with $26,000 in prizes being awarded ($20,000 for 1st, $5,000 for 2nd, and $1,000 for 3rd).