Is the one-armed UBR-1 the Model-T of robots?

The one-armed UBR-1 robot “sees” with a 3D sensor in its head and a laser scanner in its base, and costs only $35,000. The developer of the robot is going as far as to call UBR-1 the “Model-T” of robots. But is it? 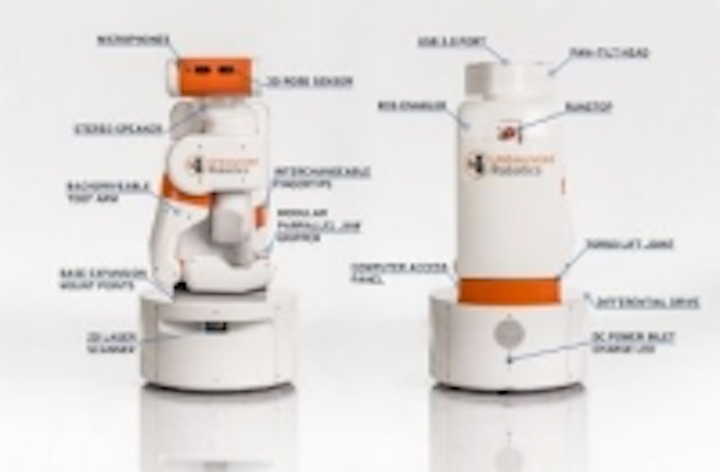 The UBR-1 robot from Unbounded Robotics is a one-armed; $35,000 robot that will initially be deployed in research environments, but with the robot’s advanced platform, could be launched into a variety of applications. Its creators are even calling it the "Model-T" of robots.

In an interview with IEEE Spectrum, Unbounded Robotics CEO Melonee Wise says the robot, which only comes in orange and white (like the Model-T), has just one arm for a number of reasons. First, she said she thought about the type of research involving robotics that is being done today, and realized a one-armed robot would suffice in many situations. In addition, having only one arm will help reduce the size and cost of the robot. Wise cites Willow Garage’s PR2 robot, which costs about 10 times more than the UBR-1 and has 80 pound arms, compared to a total weight of 160 pound for the UBR-1.

The sensor from PrimeSense, which helped to develop the Microsoft Kinect, gathers the data needed for the robot to move its arm, while the laser scanner helps UBR-1 to create real-time maps of its location and maneuver around.

Wise says that the base version of the robot, UBR-1, will likely be used in small workspaces such as research applications, but a second model with a longer-range (30m) laser sensor (UBR-1S), a faster processor and higher top speed, will be released for use in larger environments.

While it’s tough to say whether this is actually the “Model-T” of robots, its compact design and significantly lower price point, along with its autonomous vision system, should garner plenty of interest.

Also check out:
Robots, UAVs used to photograph lions in the wild
Researchers hoping to mimic vision of dragonflies in robots
How robots could remove blood clots with medical imaging and steerable needles