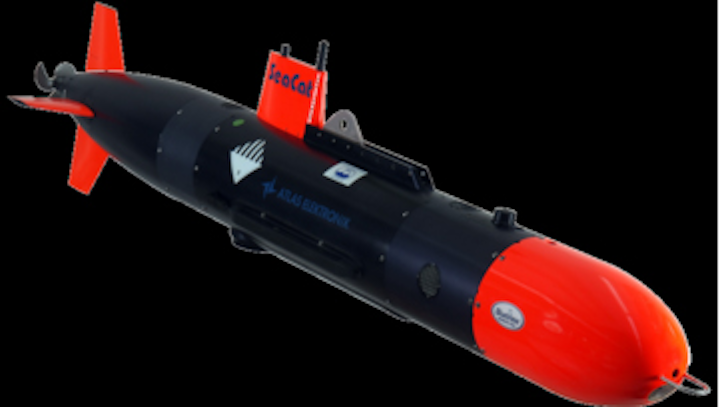 The 2.5 m long torpedo-shaped SeaCat underwater vehicle was guided into the tunnel by remote control. For the first 300 meters, the SeaCat was controlled through a laptop via a fiber-optic cable. After the vehicle had passed several obstacles, the cable was cut and an autonomous guidance system was activated to control the craft for the next 7 hours and 24 kilometers. The speed was about a meter per second, corresponding about 2 knots or 3.6 km/h.

The Albstollen tunnel, with a length of 24 kilometers and a diameter of 2.25 meters, forms part of the water supply system operated by Bodensee-Wasserversorgung (BWV) with headquarters in Stuttgart. As the largest German long-distance water distribution systems, it provides fresh water from Lake Constance to four million people. As one of two main lines, the Albstollen passes through the Swabian Jura range to supply Stuttgart and the northern part of Baden-Württemberg.

Although the tunnel had been checked regularly in the course of its 40-year lifetime through measurements of the leakage rate, a visual inspection of its condition over the entire length had not been technically possible until Atlas Elektronik inspected the tunnel using its autonomous diving robot.

The vehicle was tasked with recording video data over the total length of the tunnel, while moving continuously through the concrete tunnel and remaining centered with the aid of laser distance sensors.