As Version 2.0 of the CoaXPress standard is adopted, frame grabbers and camera vendors alike are introducing products to support the higher-speed interface.

As Version 2.0 of the CoaXPress standard is adopted, frame grabbers and camera vendors alike are introducing products to support the higher-speed interface.

Unveiled ten years ago at the VISION show in Stuttgart, Germany, and approved as a standard in 2011, CoaXPress (CXP) has emerged as a popular point-to-point, deterministic, low-jitter camera-to-computer interface. Superseding the Camera Link standard that even at its fastest data rates could only muster 6.8 Gbits/s (850 Mbytes/s) in Extended Full or Deca Mode (referred to in the Camera Link specification as 80-bit mode), the initial version of CXP boasted a modular design in which single scalable links of up to 6.25 Gbit/s (CXP-6) can be used. One of the most popular configurations using four CXP links can then be used to transfer data at speeds of a maximum 25 Gbits/s from camera to computer. 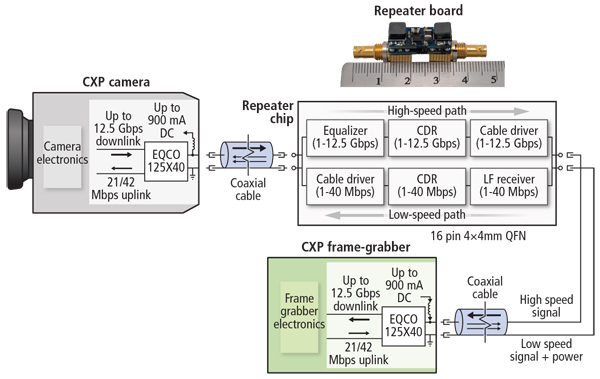 One of the major benefits of the CXP 1.0 standard is its ability to transfer image data using relatively low-cost coaxial cable with a standard 75 Ω BNC connector. Using this cable and depending on the speed of the camera-to-computer data transfer rate, cameras can be placed at approximately 68 m (using 6.25 Gbit/s CXP-6 links) to as far as 200 m distances (using 1.25 Gbit/s CXP-1 links).

As well as transferring data at these rates, Version 1.0 features a serial 20.83 Mbps frame grabber-to-camera uplink channel that is used for such I/O features as camera triggering and camera control. In Version 1.0 of the specification, the 6.25 Gbps data channel and 20.83 Mbps channel use 8b/10b encoding to achieve a DC-balanced signal. Just as Camera Link allowed power to be transferred over the cable, so too does CXP 1.0, providing up to 13 W of power per cable to the camera from the frame grabber or other source. 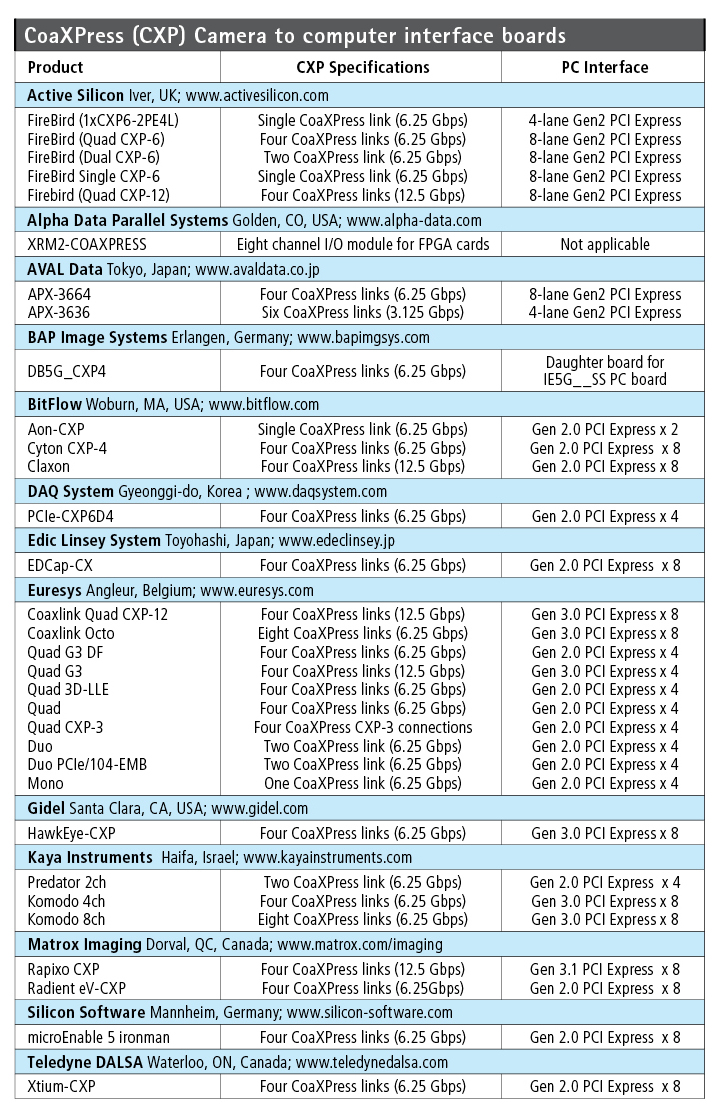 In February 2013, the Japan Industrial Imaging Association (JIIA; Tokyo, Japan; www.jiia.org) introduced a revised version of the CXP standard (Version 1.1) that made a number of improvements to the existing standard including additional support of a DIN connector in addition to existing BNC types, and subsequently released version 1.1.1 in December 2015 with minor clarifications. CXP has been so successful that today more than thirty frame grabbers and cameras support the CXP standard. 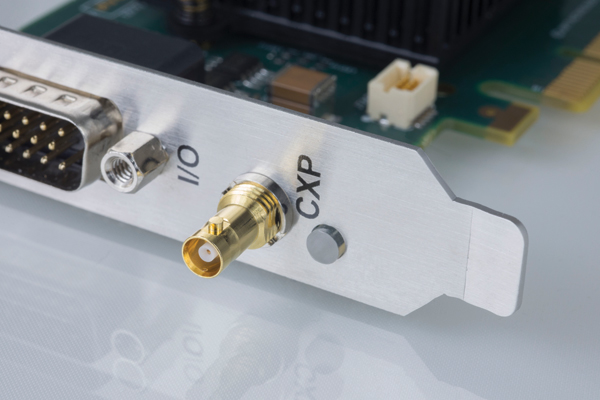 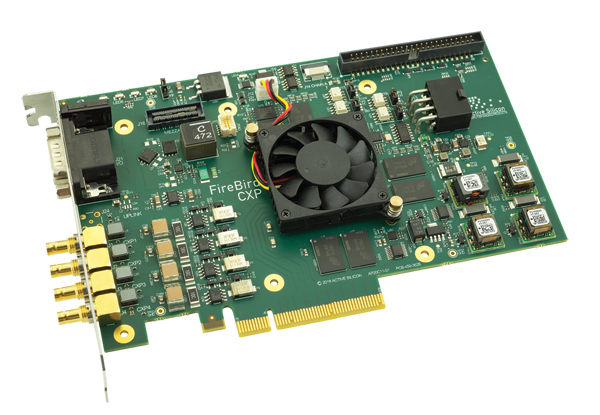 At the 2018 VISION show, held in Stuttgart, Germany, a number of companies announced products for the newly announced Version 2 of the standard (Table 1 and 2). Many of these use CoaXPress 2.0 transceivers from Microchip (Chandler, AZ, USA; www.microchip.com). As well as locking to any speed presented to the device at 12.5 Gbps (CXP-12) or lower, the device can also be used as a cable repeater. Thus, when developers need more than 40 m camera-to-computer distances they can add Microchip’s CXP 2.0 transceiver as a cable repeater and achieve an additional 40 m with each inline insertion. To ease the development of such cable repeaters, Microchip offers an add-in cable module that receives power, high-speed downlink, and low-speed uplink data over the same cable (Figure 1).

Since CoaXPress 2.0 supports data links as fast as CXP-10 (10 Gbps) and CXP-12 (12.5 Gbps), systems integrators can use cameras and frame grabbers that can be deployed with fewer camera-to-computer links, thus achieving the same performance as those with more links (used in Version 1) while lowering the cost of system design. Other hardware features of the CXP Version 2.0 specification include adding support for Micro-BNC connectors which, while slightly more expensive than BNC connectors, support the high frequency signals required at speeds of 12.5 Gbps (Figure 2).

CoaXPress version 2.0 also adds support for much faster cameras by allowing one camera to stream data to multiple frame grabbers which may be in different PCs. This overcomes the PCI Express bandwidth bottleneck in a PC and the need to process all the data in the one PC. As an example, one camera could have four sets of 4 x CXP-12 connectors, each of which connect to a standard 4 x CXP-12 frame grabber, giving a total system bandwidth of 200 Gbps.

In the original CXP Version 1.0 specification, a serial 20.83 Mbps frame grabber-to-camera uplink channel is used for camera triggering and camera control. In Version 2.0 of the specification, this up-connection speed is doubled from 20.83 Mbps to 41.67 Mbps at CXP-10 and CXP-12 speeds. According to Chris Beynon, Chief Technical Officer with Active Silicon, the key benefit of this is that line-scan trigger rates are doubled to nearly 300 Hz with exposure control, or 600 Hz with a fixed exposure time.

A CXP Version 2 frame grabber supporting 4 x CXP-12 needs a faster interface, and 8-lane PCI Express Gen 3 is likely to be the most popular. Here, each Gen 3 lane runs at 8 Gbps with 128B/130B encoding, and the resulting real-world throughput of 8 lanes is approximately 7.1 Gbytes/s (Figure 3).

The Cyclone 2-2000MC from Optronis (Kehl Germany; https://optronis.com/en/) for example is a CXP-12 based machine vision camera with four output links and a bit rate output of 27 Gbits/s. Although three CXP-12 frame grabber links could be used for this purpose, no frame grabber vendor offers such a product. Therefore, a four-link frame grabber must be used.

As the latest incarnation of the CXP standard, CoaXPress 2.0 delivers enough bandwidth to support today’s high resolution, high frame rate cameras while offering faster camera triggering rates and data forwarding, which is important in applications such as web inspection or 3D imaging where images need to be rapidly processed. 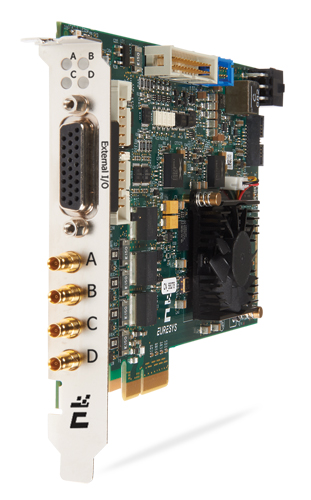 Figure 4: The Coaxlink Quad CXP-12 from Euresys, a Gen 3.0 PCI Express x 8 board, can easily accommodate frame grabber-to-host PC data rates required by the Cyclone 2-2200MC camera. As well, the board incorporates Laser Line Extraction functionality embedded in the board’s FPGA that can generate 16-bit 3D depth maps directly from images reflected from a laser line projected onto an object. Image courtesy Euresys.

Indeed, Euresys’ Coaxlink Quad 3D-LLE x4 CXP frame grabber with its Laser Line Extraction functionality embedded in the board’s FPGA can generate 16-bit 3D depth maps directly from the images of a laser line projected onto the object to be inspected (Figure 4). As the laser-line-extraction process is carried out on board, there is no CPU overhead and the developer can choose among several measurement algorithms to accommodate different types of object surfaces. With measurement precision reaching 1/256 pixel with the embedded Peak and Center of Gravity (COG) algorithms, the maximum measurement speed can be as fast as 19,000 profiles/s from 1024 x 128 images or 38,000 profiles/s from 1024 x 64 images.

While such data rates are faster than ever before, they present a conundrum facing developers of cameras and frame grabbers: of what should the next generation of CoaXPress standard be comprised? This is one of the concepts the CoaXPress committee and other companies are studying, with many seeming to bet on a fiber future.

Teledyne DALSA (Waterloo, ON, Canada; www.teledynedalsa.com) has already developed its Xtium2-CLHS PX8, a PCIe Gen3 board that supports up to four bidirectional SPF+ modules to capture up to 4.0 GBytes/s of image data and transfer this to the host at up to 6.8 GBytes/s. The SPF+ module and fiber optic cables extend the camera-to-frame grabber connection to 100 m. Additionally, the Xtium2-CLHS FX8 is capable of supporting multiple independent CLHS cameras. 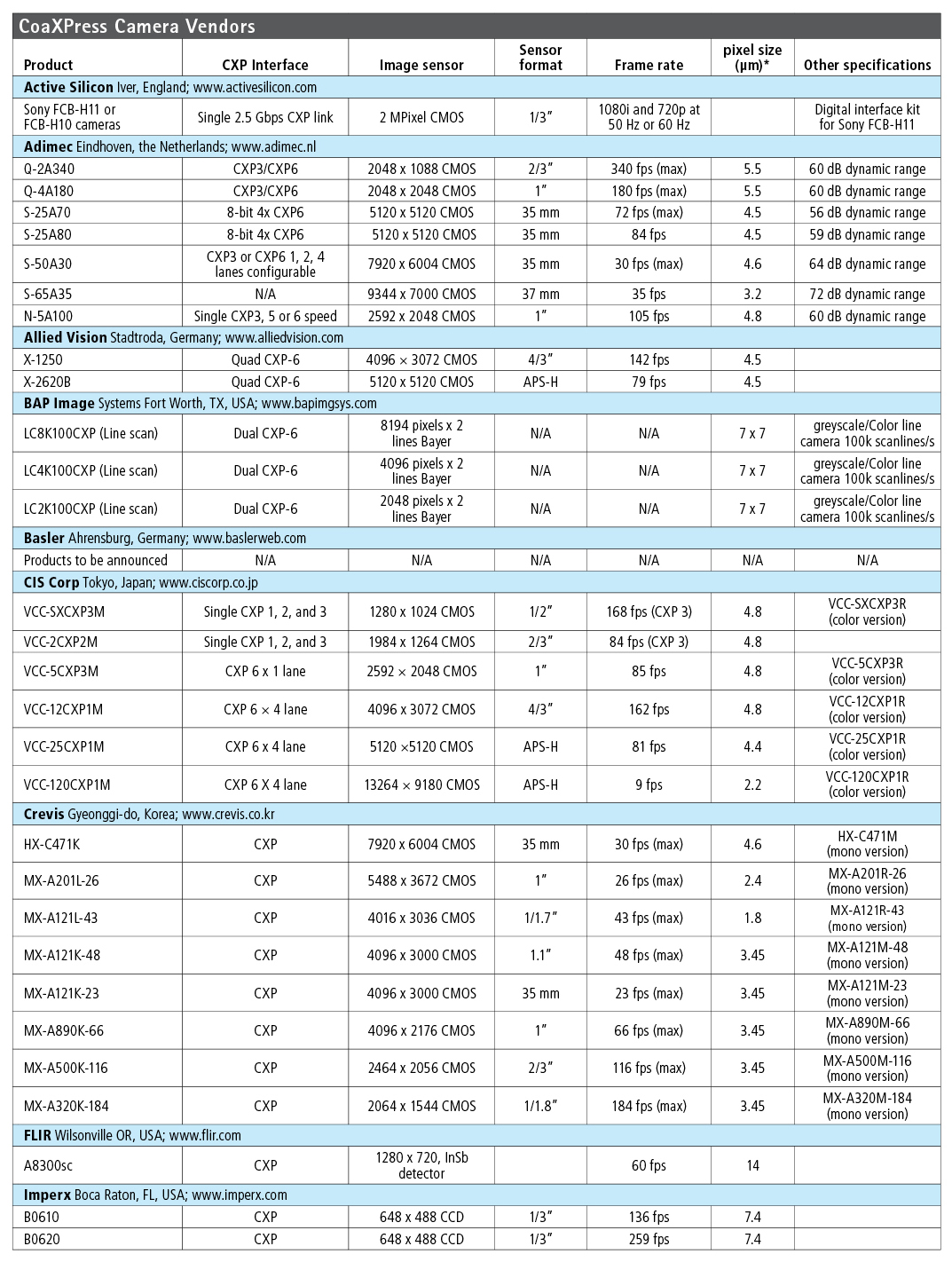 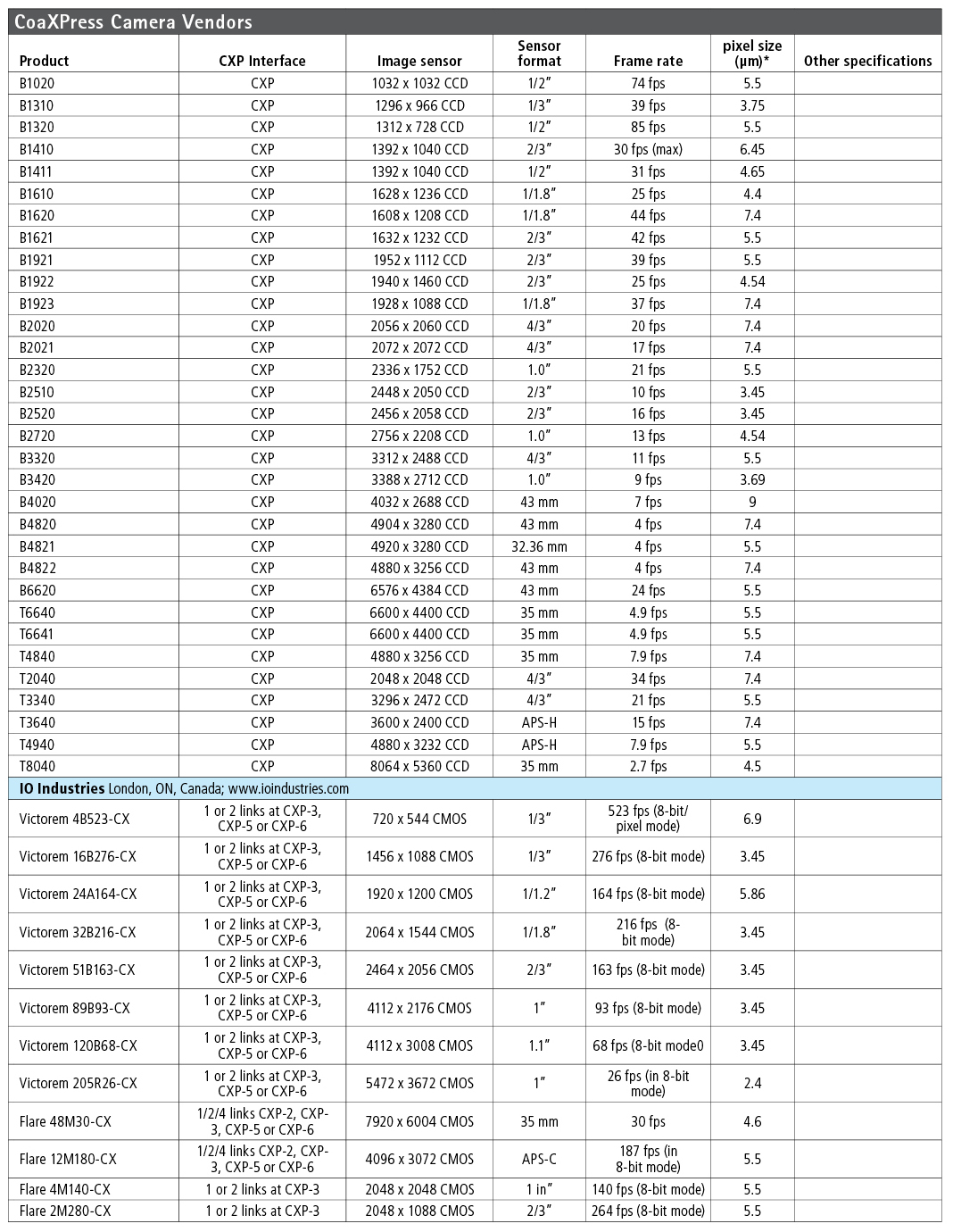 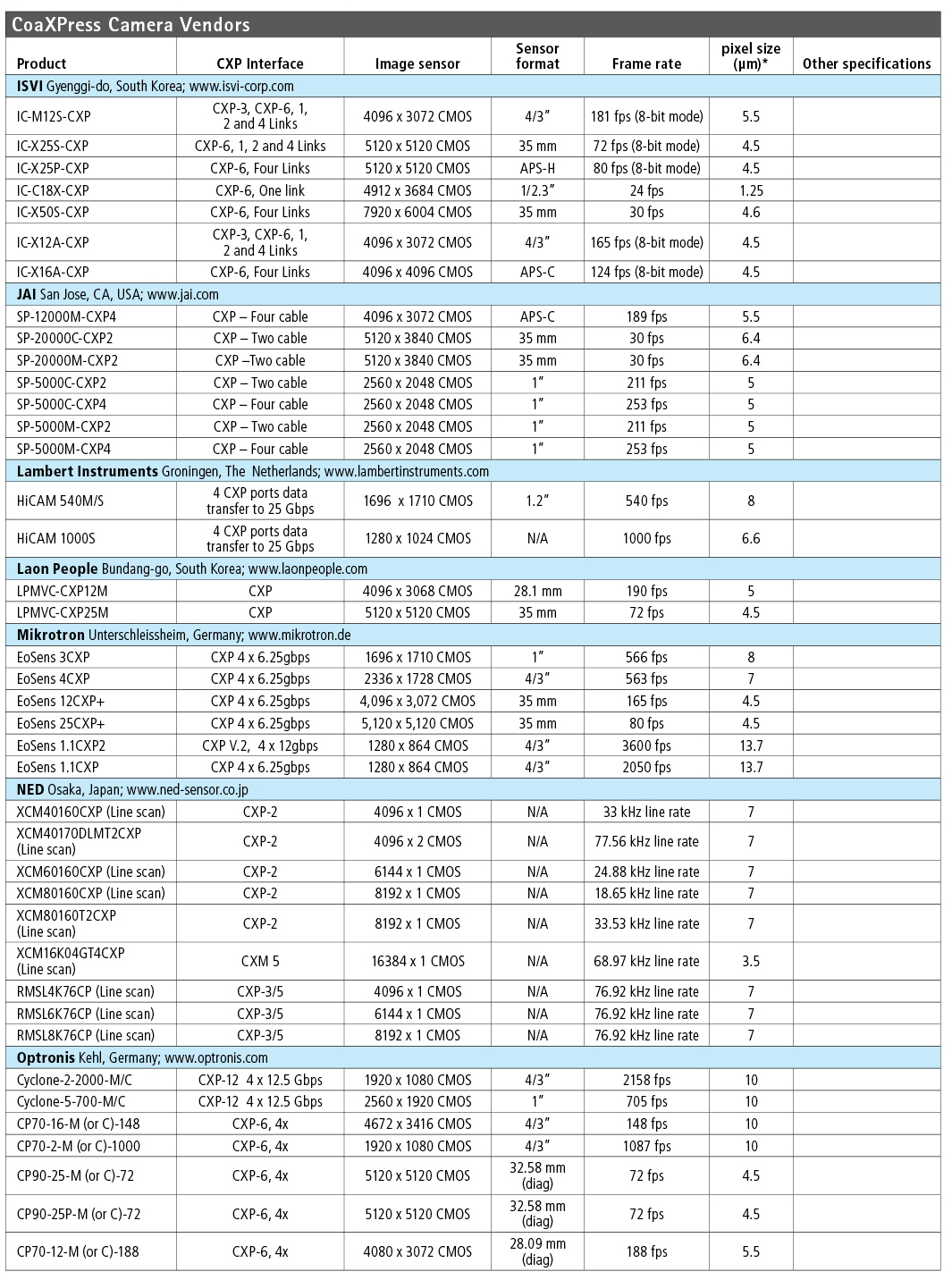 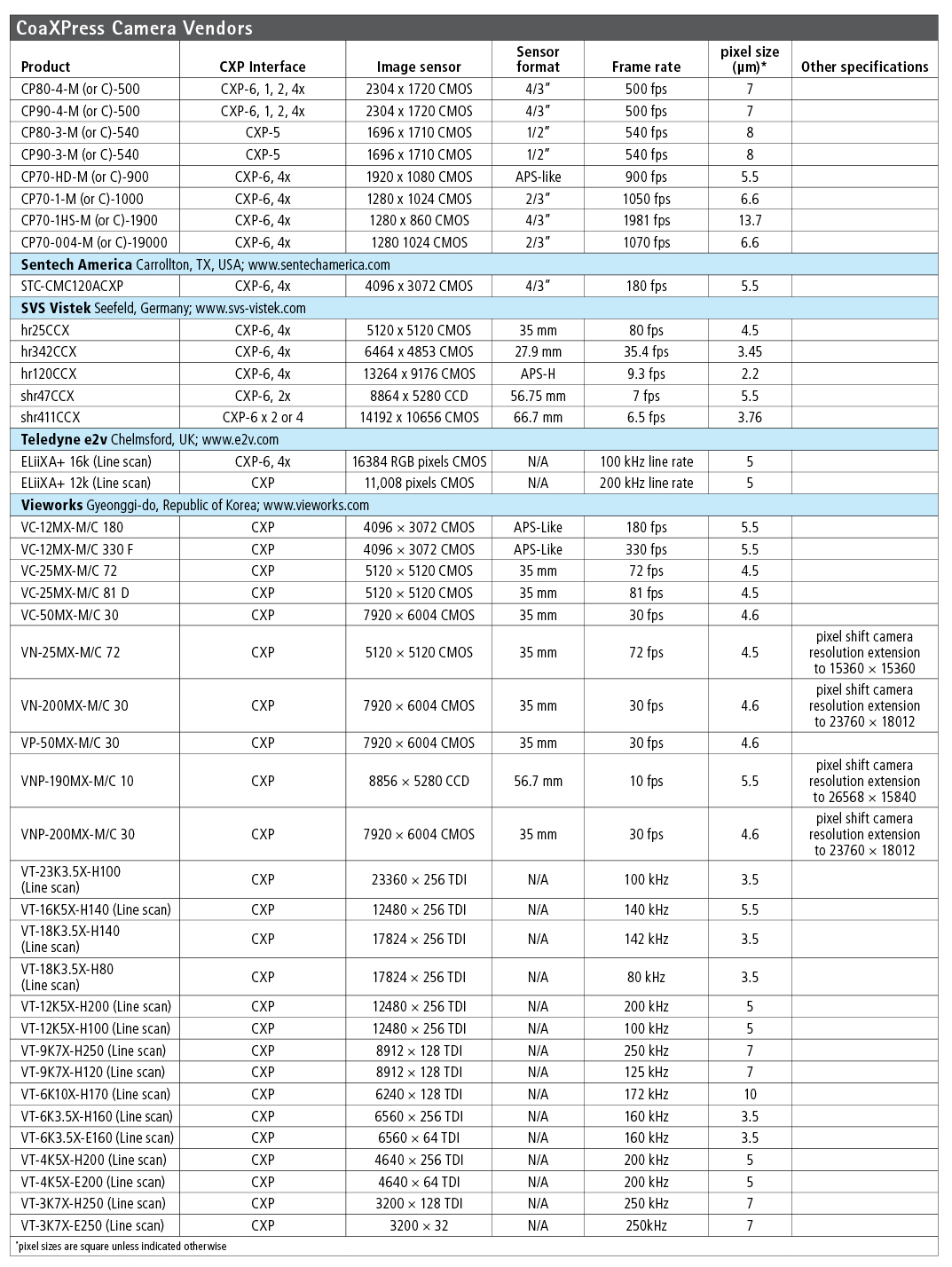 The author would like to thank Chris Beynon, Technical Chair for the CoaXPress standard, and CTO at Active Silicon, for his assistance in preparing this article.