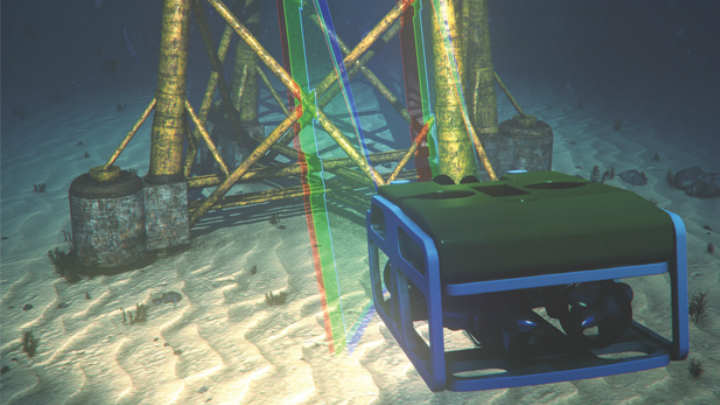 The company’s SeaVision 3D RGB laser scanner—which is offered as a standalone scanner for remotely-operated vehicles (ROV) or underwater unmanned vehicles—targets the inspection of subsea assets including underwater cabling, ship hulls, anchor chains, propellers, oil and gas pipelines, as well as the monitoring and analysis of coral growth.

“In situations where a diver needed to go subsea and measure something manually, a ROV equipped with our system replaces that person and removes them from potential harm, while offering the ability to inspect potential subsea damage and create full 3D reconstructions of damaged areas,” says Patrick Paranhos, Director of Business Development, Kraken Robotics.

The 3D laser scanner system consists of two cylindrical scanner pods measuring 460 x 113 mm. Each pod has a 1280 x 960 low-light visible camera capable of reaching frame rates of up to 144 fps, and three FLEXPOINT MVnano machine vision lasers—one red, one blue, one green—from Laser Components (Olching, Germany; www.lasercomponents.com). The camera from one scanner pod observes the laser of the second scanner pod, while the second scanner pod’s camera observes the laser of the first scanner pod, creating a twin structured light system with an adjustable baseline distance between the two pods that ranges from 20 to 200 cm. 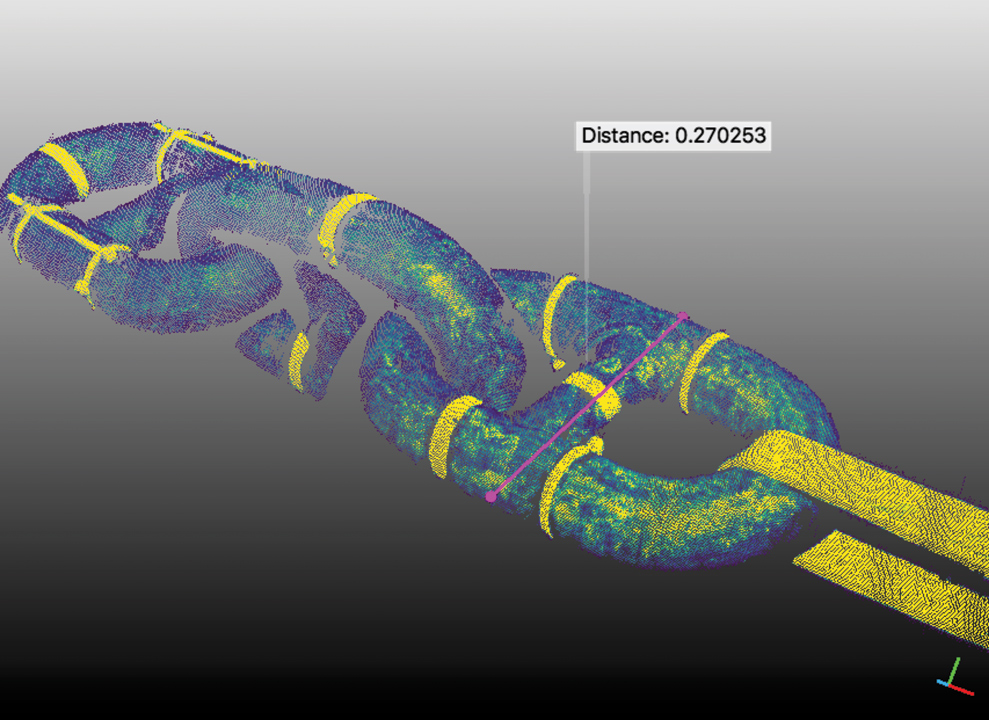 Offered as a standalone scanner, the system can be deployed to inspect underwater cabling, ship hulls, anchor chains, propellers, and oil and gas pipelines.

A software-based auto calibration system allows flexible mounting options to fit a variety of vehicles—from observation to work class ROVs—and enable in-field calibration, which is required every time the system is installed in a new configuration onto a vehicle.

Images captured by the scanners are used to create 3D models, and processing is done on an onboard GPU-based system. Embedded processing enables the system to produce a full 3D scan of up to 1.2 million points in 4 seconds, according to the company.

A benefit to using 3D point clouds as opposed to 2D images lies with the fact that a point cloud provides quantitative information, such as the volume of a given area, which is particularly helpful in determining information on the life expectancy of a sacrificial anode, for example.

Each scanner—comprised of a camera and RGB lasers—is contained within a single pressure housing pod, and the lasers are mounted on internal rotational units also within the pod. The lasers are steerable, with on-board embedded LEDs providing scene illumination.

Lasers of different color and wavelengths behave differently underwater. Variation in temperature, salinity, dissolved gas, floating matter, and surface color affects the laser absorption, scattering, and reflection. The blue-green wavelength has the greatest penetration, while the red wavelength is attenuated over much shorter distances than blue-green light. The RGB laser scanner offers the flexibility to optimize the laser color to the operation and environment.

In use, the operator drives the ROV up to the point requiring inspection, and a camera provides the operator with a view of the scene. The operator turns on the measurement functionality, and a sweep of the scene with the lasers takes place, resulting ultimately in the generation of a point cloud within the software.

One challenge in this application is that the ROV is in motion during the scan, which takes four seconds. Motion during the scan is compensated in post-processing through a proprietary algorithm capable of measuring vehicle motion without additional external sensors.

SeaVision creates a point cloud from which specific measurements—including volume, distance, or shape analysis of an object being inspected—are required. The system also enables the observation of changes between two point clouds, which may be necessary in the case of coral analysis, for example, where it is necessary to see how much coral has grown, explains Paranhos.

SeaVision is also used as a subsea asset digitalization tool in partnership with GE´s Avitas Systems (Boston, MA, USA; www.avitas-systems.com). Once the scanners acquire high dynamic range photos and point clouds, these are uploaded to the cloud, where the proprietary software developed by Avitas Systems processes and contextualizes the data with annotations and locations. The analytics software platform deploys trained artificial intelligence algorithms for target detection, scene change detection, and a host of other measurement capabilities. A variety of captured images and prior-collected data allows for the use of deep learning techniques within the Avitas Systems software.