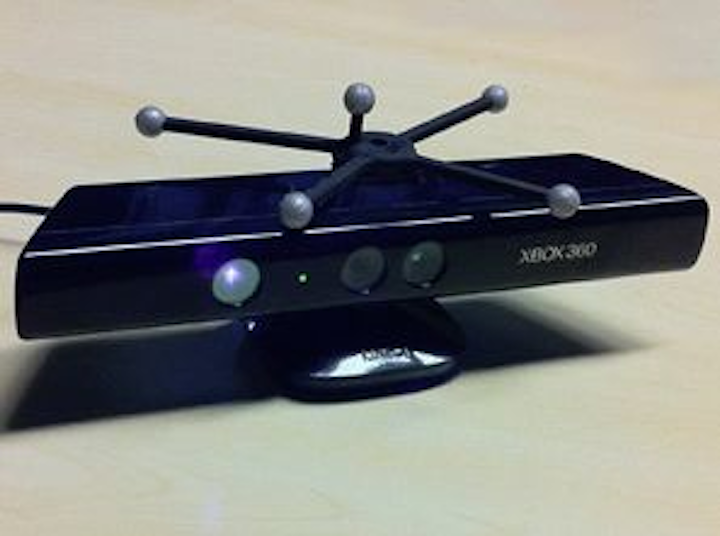 Originally intended to sit atop a television and sense the movement of users playing video games, the Kinect was repurposed by Jürgen Schulze, a research scientist at UCSD and his master’s student Daniel Tenedorio.

The scanning process itself entails moving the modified device by hand over the surface of an object. Thousands of scans are then stitched together to give a full 3-D model. Since the progress of the scan can be monitored in real time, a user can quickly fill in any holes in the 3-D models.

The original Microsoft Kinect system projects a pattern of infrared (IR) dots onto an object, which are then captured by the device’s IR sensor. The reflected dots create a 3-D depth map. Nearby dots are then linked together to create a triangular mesh grid of the object. The surface of each triangle in the grid is then filled in with texture and color information from the Kinect’s color camera. A scan is taken 10 times per second and data from thousands of scans are combined in real time, yielding a 3-D model of the original object or person.

One challenge Schulze and Tenedorio faced was to spatially align all the 3-D scans from the mobile device. Without a mechanism for doing so, the 3-D model created would be a discontinuous jumble of images. To overcome this problem, they added a five-pronged IR sensor to the top of the Kinect. Overhead video cameras track this sensor in space, thereby tagging each of the infrared scans that are captured with their exact position and orientation. This tracking makes it possible to seamlessly stitch together information from the scans, resulting in a stable 3-D image.

The researchers are now working on a tracking algorithm that incorporates smart phone sensors, such as an accelerometer, a gyroscope, and GPS (global positioning system). In combination with the existing approach for stitching scan data together, the tracking algorithm would eliminate the need to acquire position and orientation information from the overhead tracking cameras.