Five scientists from Binghamton University have demonstrated the potential of thermal vision systems deployed on low-altitude UAVs to detect mines such as the PFM-1 more quickly and efficiently than human-dependent methods. The technique is based on sensing thermal inertia signatures, or an object's ability to resist fluctuations in temperature. PFM-1 mines heat up and cool down at different rates than surrounding objects in the natural environment. A thermal vision-equipped drone can observe the ground over time to detect these anomalies. 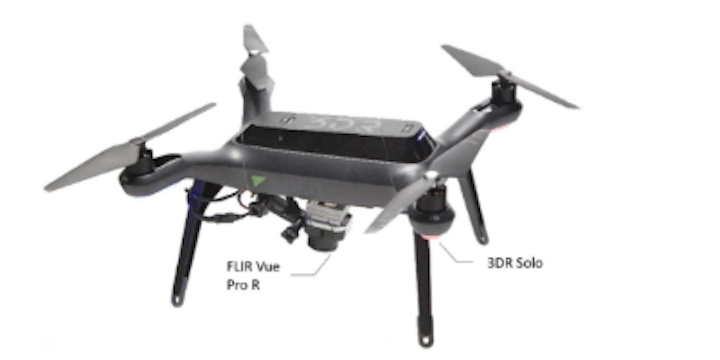 Five scientists from Binghamton University have demonstrated the potential for thermal vision systems deployed on low-altitude UAVs to detect landmines more quickly and efficiently than human-dependent methods. The technique is based on sensing thermal inertia signatures, or an object's ability to resist fluctuations in temperature. A thermal vision-equipped drone can observe the ground over time to detect these anomalies.

Mines like the PFM-1 anti-personnel "butterfly" mine deployed by the Soviet Union during its war in Afghanistan, often to block access to high-altitude mountain passes, are of particular concern for humanitarian groups removing unexploded landmines from former combat zones. The PFM-1 is made largely of polyethylene and thus difficult to detect via traditional EMI methods like metal detectors without the return of false positives. It is known as "the toy mine" owing to the propensity for children to discover unexploded PFM-1 units and mistake them for playthings, a deadly proposition as the PFM-1 is triggered by only around 5 kg of pressure. It is estimated that over a million of these mines remain in place in Afghanistan. 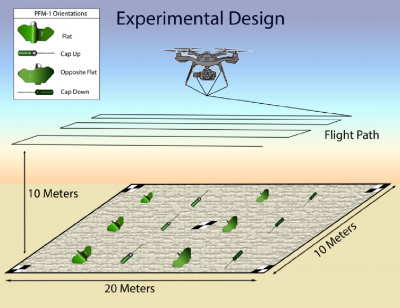 The team from Binghamton University in 2017 conducted a proof-of-concept study in Chenango Valley State Park, New York. 18 inert PFM-1 mines were placed in a former parking lot, in four different orientations, to create a 10 x 20 m facsimile of the type of minefield created by aerial dispersion of the weapons in the environments in Afghanistan in which the mines were often deployed.

The images were pre-processed using ThermoViewer software to create 14-bit raster data sets. The data was then exported to pix4Dmapper for photogrammetric processing. The thermal imaging data was supplemented with aerial photography taken with a DJI Phantom 4 20 MPixel camera.

The LWIR photography was able to easily detect the mines at and shortly following sunrise. In early morning flights the mines were cooler than their surrounding objects due to the mines' inability to retain heat as well as the natural objects around them. Once struck by sunlight the mines heated much faster than objects in the environment. Temperature differentials once again become pronounced at and after sundown. Mines were detected regardless of their orientation and the researchers were able to identify all 18 inert mines with an average of 77.88% accuracy over multiple test flights.

It was more difficult for the drone to detect mines in environments with vegetation or clutter than in "cleaner" environments like sand, silt, or clay. It is possible that partially-buried mines would be more difficult to detect using this method. Future research will study the effect of environments with varying humidity and seasonal temperatures. The researchers also plan to investigate the potential for automated algorithms and machine-assisted detection.

This drone-based technique may not be able to fully replace human efforts. Used as a cooperative tool, however, this method can discover mine presence, minefield orientation, and minefield overlap, data that could make demining less expensive due to search area reduction, and lead to the increased safety of those attempting to remove the mines.

The study, titled "Detection and Identification of Remnant PFM-1 'Butterfly Mines' with a UAV-based Thermal-Imaging Protocol," was published in October 2018 and presented on December 12 at the fall meeting of the AGU in Washington, D.C. The researchers on the project were Alex Nikulin, Timothy S. de Smet, Jasper Baur, William D. Frazer and Jacob C. Abramowitz from the Department of Geological Sciences and Environmental Studies at Binghamton University. You can read the full report on ResearchGate.

Dynamic Optics is showcasing its Shack Hartmann wavefront sensor at SPIE Photonics West 2019, which can measure a wavefront with an accuracy of more than λ/100 with a dynamic range of 20 diopters.
Jan 11th, 2019