Report focuses in on the infrared market

A new report from Yole Développement takes a look at trends and technologies in the uncooled infrared imaging (IR) market. 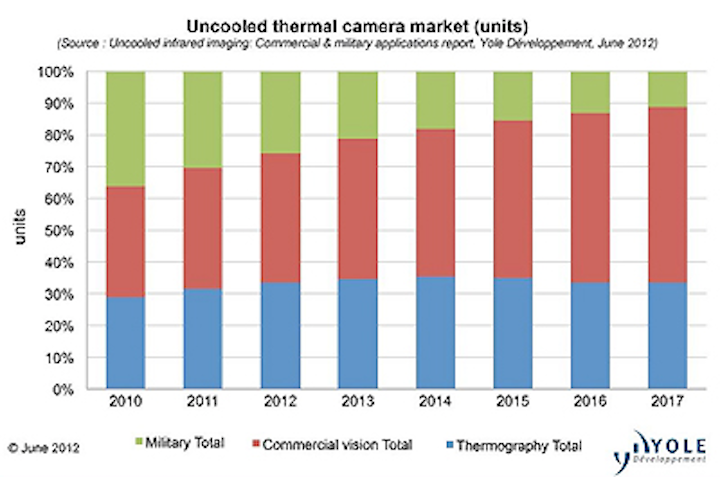 Report focuses in on the infra red market

A new report from Yole Développement (Lyon-Villeurbanne, France) takes a look at trends and technologies in the uncooled infrared imaging (IR) market.

Initially developed for the military market by US defense companies, infrared (IR) uncooled cameras are now widely used in many commercial applications. The report analyses both the military and commercial markets as well as forecasting the size of the market until 2017.

While the number of infrared systems shipped into the military market over that period is predicted to decline, the commercial market for such systems would appear to be growing significantly.

The authors of the report -- "Uncooled Infrared Imaging: Commercial and Military Applications" -- believe that the growth in the commercial business is being driven by developments in the thermography, automotive and surveillance markets.

In the thermography market, for example, traditional power tool markers such as Dewalt (Baltimore, MD, USA) and Milwaukee Tools (Brookfield, WI, USA) have recently introduced hand-held thermal imagers that can be used in industrial inspection applications to pinpoint flaws in insulation or circuits that are overloaded.

In the automotive market, the report claims that, at present, Autoliv (Stockholm, Sweden) is the sole supplier of infrared night-vision imaging systems, but increased sales by 30 percent in volume in 2011. The report expects that IR cameras sales for automotive will exceed 300,000 units in 2017, but installation rate in cars will remain below 1 percent in the long term.

Surveillance is the last area that the report believes has a rosy future. The report claims that new products from visible CCTV and military suppliers are already targeting the growing business and have started a price war.

Interested in reading more about infrared imaging? Here’s a compendium of ten of the top stories on the subject that Vision Systems Design has published over the past year.

1. Infra-red detectors made from nanotubes

A team of researchers from Peking University, the Chinese Academy of Sciences, and Duke University (Durham, NC, USA) has harnessed the properties of single-walled carbon nanotubes (SWNTs) to create a highly sensitive, uncooled photovoltaic infrared detector.

District heating systems distribute hot water or steam heat generated in a centralized location to residential and commercial properties through an underground network of pipes. But inspecting and maintaining a large district heating network can be a difficult task.

Using a system that incorporates multiple visible and infrared (IR) cameras, researchers at the Leibniz University of Hannover are studying human movement.

Researchers at the University of Wisconsin–Madison (Madison, WI, USA) have developed an infrared image-processing system that captures time-lapse images of how plants grow.

LumaSense has developed a turnkey system known as BoilerSpection for continuous infrared (IR) imaging inside the boilers of coal-fired power plants.

Engineers at FLIR Systems (Wilsonville, OR, USA) have applied a super-framing technique to the company's SC6000 and SC8000 series of InSb-based infrared (IR) cameras to extend the effective scene brightness of a thermal image while maintaining its thermal contrast.

Researchers from the University of Maryland Center for Environmental Science's Appalachian Laboratory (Frostburg, MD, USA) have conducted a study in which they set up infrared (IR) motion-detecting cameras to discover what sort of creatures are using the underground storm drains that lie under Maryland's highways.

Researchers at the Polytechnic University of Valencia (Valencia, Spain) have developed a ground-based machine-vision system that combines infrared (IR) imaging and a global positioning system (GPS) that promises to reduce the cost of crop monitoring.

Researchers at Universidad Carlos III de Madrid (UC3M; Madrid, Spain) are developing an infrared imaging system that will allow them to analyze the thermal resistance of composite materials.