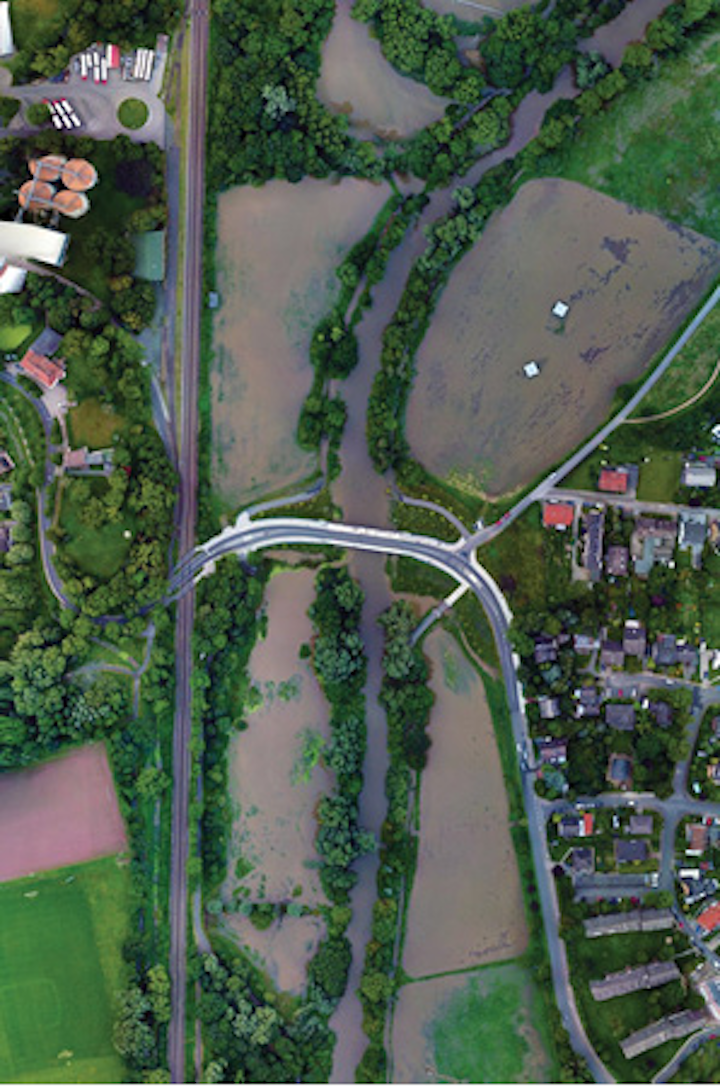 In certain areas of the world, heavy rain and storms cause flooding. The sheer amount of water overruns sewage capacities and water bodies rise over their banks, often with destructive force and disastrous effects.

Affected areas are often inaccessible and dangerous for emergency responders on scene. Addressing this, engineers from the Technical University of Braunschweig (Braunschweig, Germany; www.tu-braunschweig.de) developed a drone for automated reconnaissance to support disaster response personnel. Named “Hugin,” the drone provides aerial imagery for emergency responders, allowing them to intervene when necessary.

Chosen for its light weight, ethernet connection, global shutter sensor, and high resolution—says the team—the camera also has Power over Ethernet and a C-Mount lens mount.

During flight, the drone captures individual images from altitudes of approximately 100 m. Since image preprocessing functions such as light correction, white balance, and color correction take place in the camera, images are transmitted to the base station on the ground. A proprietary local communication network enables targeted information exchange. Deploying the vision-guided drone provides emergency responders the ability to evaluate situations better and more quickly due to the aerial images acquired.

Hugin can remain in the air for up to 30 minutes without recharging, and secure communication via command link is guaranteed within a range of 1 km. Equipped with a control system based on positional data, the drone can safely navigate a predefined route even in challenging environmental conditions, with peak wind loads of up to 12 m/s.

An operator on the system’s ground station sets a flight path by choosing an area for the drone to fly over. Flight planning is automatically performed and incorporates all mandatory parameters, e.g. opening angle of the lens, to ensure a minimal defined overlap for photogrammetric processing of the obtained images. The drone follows the flight path automatically and captures images, enabling live evaluation by the ground team.

Urgently requiring information on water levels near the Oker river’s course through the city of Braunschweig in 2017, sewage disposal company Stadtentwässerung Braunschweig (Braunschweig, Germany; www.stadtentwaesserung-braunschweig.de) sought the assistance of the Technical University of Braunschweig. Hugin deployed in a particularly endangered area where it provided visual data on the spread of the flood. Decisions based on the images were made on whether to issue warnings, make closures, and setup sandbags. The images also helped Stadtentwässerung analyze previous protective measures undertaken during flooding in 1994. Following this initial test, the company opted to use the system long-term.

The university researchers also tested the drone in a coastal protection application, where Hugin captured aerial images of dunes and dykes on the East Frisian island of Langeoog in the southern North Sea in Germany. Here, the drone captured a beach nourishment, providing visual information on how close the tide came to the dunes in the undeveloped area of the beach nourishment, and how far the surge was from the dunes when the beach level had been raised by additional sand.

Engineers Martin Becker, Simon Batzdorfer, and Markus Bobbe of the Institute of Flight Guidance at the Technical University of Braunschweig, and Jan Schattenberg, Hannes Harms, and Julian Schmiemann from the Institute for Mobile Machines and Commercial Vehicles worked on the project, while the DLR Space Administration (Bonn-Oberkassel, Germany; www.dlr.de/rd/en/) provided one million euros in funding from the Federal Ministry of Economics and Energy, in the development of an exploration system in cooperation with AirRobot (Arnsberg, Germany; www.airrobot.de/en-gb/), the maker of the drone used in this application.