The C360 is equipped with a photoionization detector, as well as a suite of advanced electrochemical sensors that provide real-time continuous monitoring of a variety of chemical hazards. 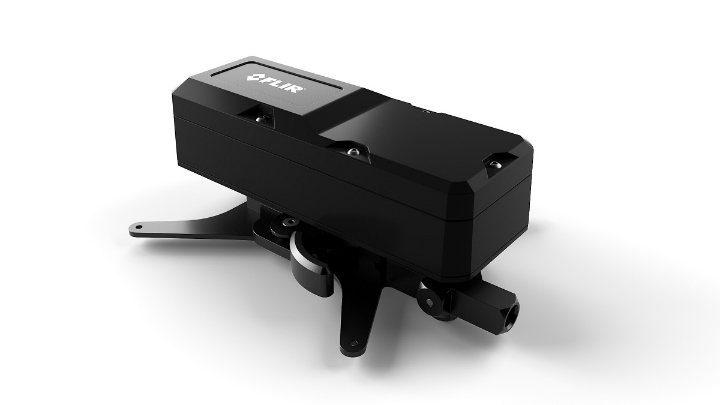 In this week’s roundup from the Association for Unmanned Vehicle Systems International, which highlights some of the latest news and headlines in unmanned vehicles and robotics, AirMap purchases Hangar Technology, NOAA personnel receive drone training, and FLIR introduces a multi-gas detector built for UAS.

A developer of products that automate drone workflows, Hangar will operate as a subsidiary of AirMap, with plans to grow its engineering, product functionality, marketing and sales teams.

During its four years of existence, Hangar has worked on several different drone uses, having spent the last year focusing on technologies for two platforms, construction and cell-phone towers.

“Hangar first joined the AirMap community as a developer of breakthrough automation technologies for enterprises,” explains Ben Marcus, AirMap chairman and co-founder, in a written statement via the Austin American-Statesman.

“We’re excited to bring this engineering talent in-house to make this technology available to our entire developer community.”

Hangar Technology CEO Scott Lumish says that the combined talents of both companies “will change the way the market collects and consumes drone data.”

“I do believe that the unique position we have in the market is going to not only increase revenue, but drive the industry forward by adding extra layers of safety and compliance that have been sorely missing,” Lumish says.

Lumish adds that the goal over the next six months is to increase the size of the engineering team in Austin by hiring approximately 10 people.

“We have very aggressive plans to increase the size of the Austin organization,” Lumish says. “The engineering talent we have in Austin is second to none.” 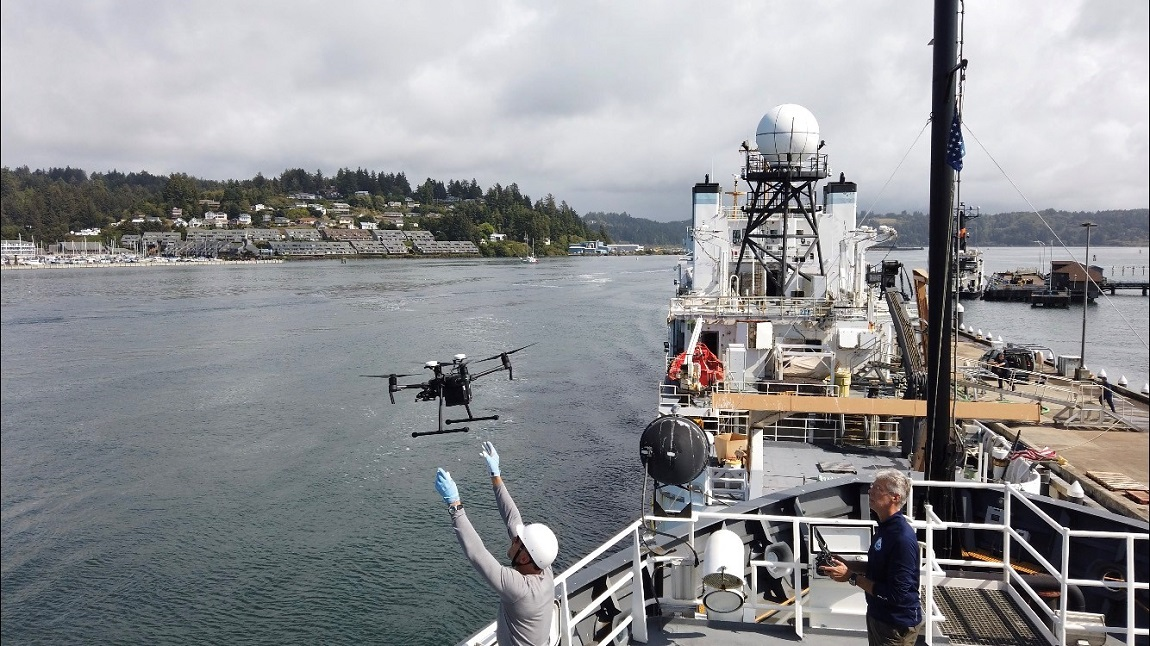 Conducted over the course of two days, training included classroom instruction, as well as hands-on flights that focused on research and mapping missions conducted from vessels. Students also practiced launch and recovery procedures, and programmed mapping missions from the deck of the NOAA Ship Hi‘ialakai while alongside the marine facility.

“These relatively inexpensive, off-the-shelf drones, have the capability to support a wide variety of ocean and coastal environmental research projects.”

This requirement could benefit from the use of UAS in several ways, including “improved data collection efficiency compared to data collection from small boats; more accurate feature investigation than traditional techniques; and, most importantly, removal of personnel from potentially dangerous situations.”

“RSD has developed much of the internal policies, procedures, and protocols necessary for safe and effective drone field operations for mapping,” says Mike Aslaksen, Chief, NOAA Remote Sensing Division. “And we’re big supporters of getting this technology operational across the NOAA fleet.” 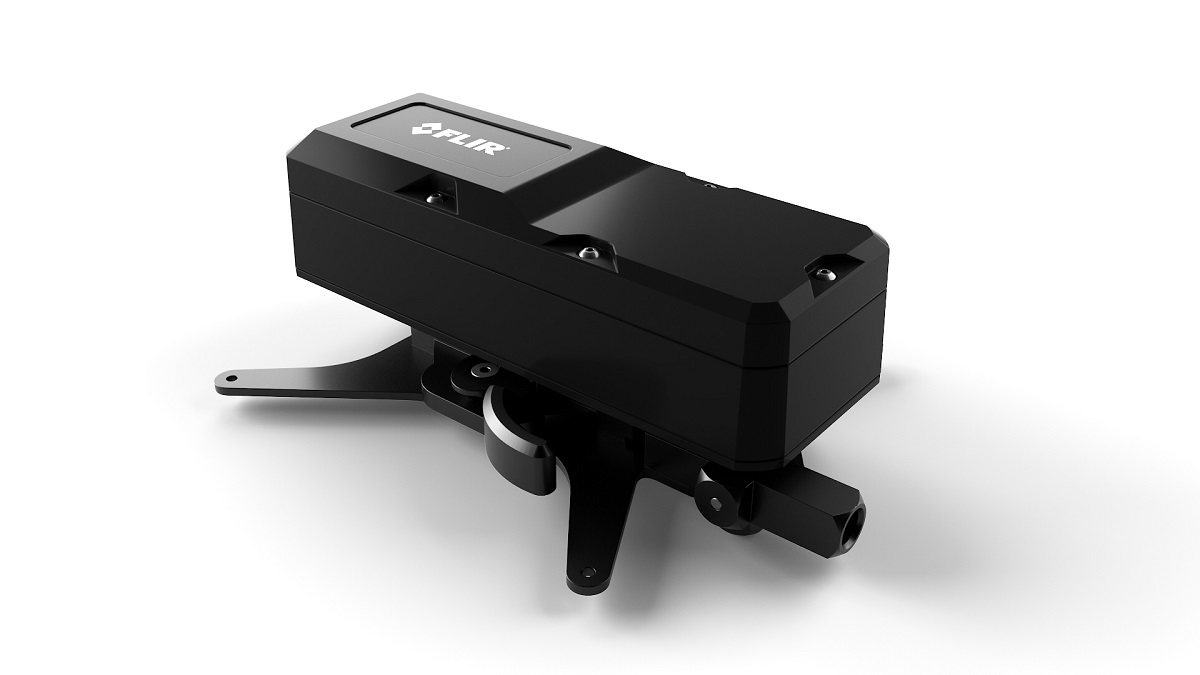 FLIR Systems has introduced the FLIR MUVE C360, which the company describes as the industry’s first multi-gas detector built specifically for UAS.

Currently compatible with the DJI Matrice 210 UAS platform, the MUVE C360 is designed to change the approach of emergency response teams when they are dealing with chemical, industrial, or environmental incidents by providing a new level of safety, significantly reducing time to action, and delivering a more complete assessment in situations where time is of the essence.

“First responders are constantly seeking better and safer ways to do their jobs, and from the moment the FLIR MUVE C360 arrives in the market, the chemical and gas monitoring process will change forever,” says Jeff Frank, senior vice president at FLIR.

“In the time it normally takes first responders to don proper equipment, the C360 has already arrived on scene, tested samples, and located the source of a hazard.

UAS pilots can use the new MUVE C360 to conduct an initial assessment of a scene before putting response teams at risk. The C360 is equipped with a photoionization detector, as well as a suite of advanced electrochemical sensors that provide real-time continuous monitoring of a variety of chemical hazards.

With this capability, emergency response teams can remotely assess situations, and select the proper personal protective equipment. Before entering active scenes, fire crews will be able to monitor the air quality surrounding these scenes, and industrial experts will be able to perform inspections in hard-to-reach areas with relative ease.

The MUVE C360 will also allow operators to understand the flow of hazardous vapors both at the source and in the air. The detector bypasses difficult terrain and enables response teams to quickly draw a perimeter and map known hazards, while preset alarm thresholds help scene commanders or security operators make quick decisions.

“With greater accessibility to drone technology than ever before, the purpose-built MUVE C360 will provide response teams with improved situational awareness that can help save lives and livelihoods,” Frank says.

FLIR has also introduced FLIR VueLink, which is a pilot flight application that provides UAS operators a plug-and-play interface to the MUVE C360. FLIR says that the app also includes advanced flight-control and interface with the FLIR Cloud.

RelmaTech incorporates in US, aims at global remote ID market

RelmaTech, a remote identification and tracking company based in London, has incorporated in the United States to market to the worldwide remote ID market for identifying drones.

Based in Greenville, South Carolina, RelmaTech Inc. will take over the lead from its parent company to market its systems, including the Secure Integrated Airspace Management (SIAM) system, its flagship remote ID product.

RelmaTech says SIAM is a lightweight, low-cost module that can be installed on a variety of unmanned aircraft to provide remote identification and tracking with low latency.

The company notes it was the only overseas-based company invited to participate on the Federal Aviation Administration's 2017 FAA UAS Remote ID and Tracking Aviation Rulemaking Committee (ARC). It also was a member of the state of Nevada's team participating in the NASA TCL4 unmanned traffic management and Integration Pilot Program trials in Reno, Nevada. All the drones flown in the TCL4 effort were equipped with SIAM for tracking and flight management.

“Establishing a formal business presence in the U.S. has always been on our radar,” says Philip Hall, RelmaTech cofounder and CEO and president of RelmaTech Inc. “Being part of the Nevada TCL4 and UPP teams on those ground-breaking programs gave us the perfect opportunity to showcase our technology to NASA, the FAA, and the global UAS industry. The encouraging response was a clear message that now was the right time to bring forward those plans.”