This week’s roundup from the Association for Unmanned Vehicle Systems International (AUVSI), which highlights some of the latest news and headlines in unmanned vehicles and robotics, covers a new drone that can perch on a wall like a robotic bird and has other bird-like features, a company that has completed inspection of more than 100,000 linear feet of railway bridges, and a small UAS that was used in aircraft crash exercises for purposes of increasing emergency response capabilities.

This week’s roundup from the Association for Unmanned Vehicle Systems International (AUVSI), which highlights some of the latest news and headlines in unmanned vehicles and robotics, covers a new drone that can perch on a wall like a robotic bird and has other bird-like features, a company that has completed inspection of more than 100,000 linear feet of railway bridges, and a small UAS that was used in aircraft crash exercises for purposes of increasing emergency response capabilities.

New drone perches on walls like a robotic bird

A new UAS called the Multimodal Autonomous Drone (S-MAD) is a fixed-wing UAS that has bird-like features.

Capable of flying like a glider through a room or open space, the UAS quickly changes configuration and lands flat on a flat surface using its "little spiky teeth," which dig into the surface to keep it from falling.

To attach itself to rough surfaces, the S-MAD uses microspines, which according to TechCrunch, are essentially "hardened steel spikes that grip small bumps in a surface from two directions."

Stanford researcher Hao Jiang explains microspines by saying, "the opposed-grip strategy for microspines is just like a human hand grasping a bottle of water, except that while humans require some macroscopic curvature to get our fingers around both sides of an object, the microspines can go deep into the micro-features of a rough surface and latch on those tiny bumps and pits."

Multi-rotor UAS already use microspines but this is reportedly the first time that a fixed-wing UAS has used microspines.

The microspines are what give the UAS its bird-like features, as the microspines allow the UAS to flatten itself against a wall and perch there. While on the wall, the UAS can collect data and scan the environment, and once it is ready to move on and fly to its next destination, all it has to do is release the microspines.

A group of researchers from the University of Sherbrooke in Quebec, Canada decided to equip a fixed-wing UAS with these microspines. The group also had to develop a new way to essentially stop the UAS in mid-air and settle on a surface, which is something that birds are accustomed to doing.

In just a split second, the UAS switches from plane to helicopter, which allows it to instantly flatten against the wall.

While the UAS is a proof of concept, it could potentially be used for a variety of applications, such as in instances where long-distance glides "terminate in a permanent perch at some high point for data collection." Upon completing its data collection, the UAS can essentially fall off the surface and fly back by righting itself. Once it climbs to altitude, it can glide home. 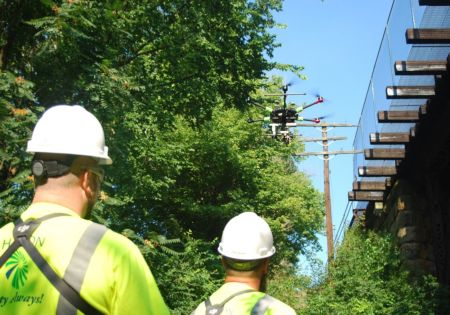 After being charged with the task of conducting the most comprehensive UAS-based inspections in the industry by Norfolk Southern back in early 2016, Virginia Beach-based Hazon Solutions has announced that it hasinspected more than 100,000 linear feet of railway bridges.

Over the last year and a half, Hazon has conducted more than 64 complete bridge inspections across the eastern United States, which has left CEO and co-founder David A. Culler, Jr. CAPT USN (ret) extremely pleased.

"The experience and expertise that HAZON has gained on the UAS inspection front have been invaluable; it has allowed us to move beyond proof-of-concept and into the transition period of integrating drones into the daily workflow. It's a very exciting time for the entire drone ecosystem and the customers we serve."

In an effort to capture the highest quality pictures possible, Hazon’s inspection teams fly within 15 feet of the rail bridges, and they also use proprietary techniques to fly under and inside bridge spans, so that they can collect imagery from angles that were unavailable before.

"We're not just getting exterior shots, we're flying underneath and inside the voids of bridges to make sure critical load bearing areas are covered from every possible angle," Cushing says.

"We also capture shots of every single bottom lateral and gusset plate; best of all, we don't consume any track time. We collect actionable information and trains keep moving."

​Outside of bridge inspections, Hazon also inspects power transmission lines in the energy sector as well. 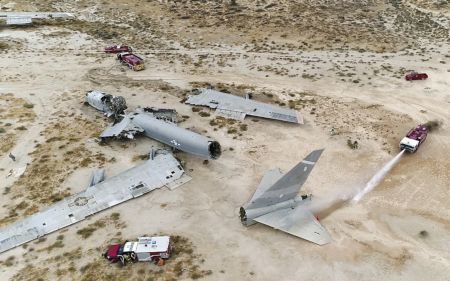 Through the exercise scenario, the Edwards Fire Department at Edwards Air Force Base in California, and the 812th Explosive Ordnance Disposal (EOD) Flight were able to respond to a simulated crashed B-52 Stratofortress on Rogers Dry Lake.

The exercise allowed responders to approach an actual dismantled B-52 on the lakebed, and the B-52 was also used as an "aerial photo calibration target and later a radar target."

Upon being the first to arrive on the scene, the fire department used firefighting tactics to extinguish the simulated fire and rescue aircraft crew members.

While these initial firefighting operations were taking place, the ETCTF launched the UAS, and it provided a live video feed, which in turn provided additional situational awareness for the incident commander. The UAS also helped accelerate the search for aircraft victims and explosive hazards.

EOD members knew the approximate location of the aircraft’s flares when they arrived on the scene, allowing them to "render safe the aircraft faster than typical."

Overall, the UAS was very helpful according to Lt. Col. Gregory Hammond, 812th CES commander, who deemed the exercise successful.

"The time savings provided by the sUAS would have enabled faster sortie generation if the crash had occurred on the active airfield," Hammond says.

"Moreover, during the response it supported a safer situational awareness."

The exercise allowed all parties involved to practice various skills. Firefighters got the opportunity to practice a lakebed response that allowed them to "set up on a visibly damaged aircraft," while EOD technicians got the chance to improve their skills in a remote environment.

For Matt Guggemos, Edwards Fire Dept. assistant chief, he believes that the future is bright for small UAS.

"I believe sUASs will be the future of emergency response. It was a great experience to be at the forefront of this technology," Guggemos says.