This week’s roundup from the Association for Unmanned Vehicle Systems International (AUVSI), which highlights some of the latest news and headlines in unmanned vehicles and robotics, covers a new low-cost 3D printed unmanned aerial system (UAS) developed by a US Marine, a drone that was used to find stranded people along the Yellow River in Iowa, and an extended range UAS that completed a 41.9 hour endurance flight.

This week’s roundup from the Association for Unmanned Vehicle Systems International (AUVSI), which highlights some of the latest news and headlines in unmanned vehicles and robotics, covers a new low-cost 3D printed unmanned aerial system (UAS) developed by a US Marine, a drone that was used to find stranded people along the Yellow River in Iowa, and an extended range UAS that completed a 41.9 hour endurance flight. 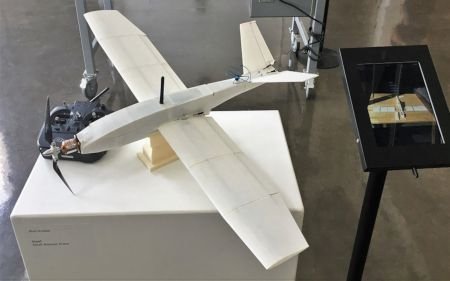 In 2015, the U.S. Marine Corps’ Next Generation Logistics innovation group, known as NexLog, was established to "advocate for the future of emerging technologies on the front lines and for equipping Marines with the ability to make solutions for their own environment."

With this in mind, Rhet McNeal, a 26-year-old Corporal from Griffin, Georgia, developed a 3D-printed UAS nicknamed "Scout" that is a cheaper alternative to the hand-launched, fixed-wing RQ-11 Raven and RQ-12 Wasp III UAS that the Marines currently use.

Costing $35,000 and $49,000 per unit respectively, the Raven and Wasp UAS are considered relatively inexpensive by military standards, but they are still expensive enough to where only a few Marines are authorized to fly them. The UAS also require $100,000+ ground control systems, adding to their overall value.

The UAS can be difficult to launch at times, and failed launches a lot of the times lead to crashes, which results in expensive repairs.

McNeal’s Scout UAS is far cheaper than the Raven and Wasp UAS, as the Scout, which can be controlled using the iPhone app Q Ground Control, can be built for just $613 with off-the-shelf electronics and 3D printer resin. A Scout UAS system, which includes two UAS and one control system, costs less than 0.5% of a $250,000 Wasp system.

"We have these drones that do a hundred things that make them cost between $35,000 and $50,000, but the soldiers normally only use the two or three big capabilities," McNeal explains.

"I wanted to strip it down to what we actually use so that our drone does not cost so much we are afraid to use it – if you break it, not a big deal."

During NexLog’s 2016 Logistics Innovation Challenge, McNeal and a team of five other collaborators submitted a proposal called "Adaptable and Affordable 3D Drones," which was a proposal for a "quick-assemble, transportable drone modeled after the Wasp but with easily printable 3D parts." The proposal was one of 17 winning ideas selected during the challenge.

By winning the Logistics Innovation Challenge, McNeal was granted access to Penn State’s Applied Research Laboratory (ARL), which is a U.S. Navy University Affiliated Research Center. It was here that McNeal first began designing the UAS and experimenting with 3D printing parts for the UAS’ wings.

The big boost in the development of the Scout UAS, though, was when McNeal participated in a 4-month residency at Autodesk’s Pier 9 technology center in San Francisco, which is a workshop that includes 3D printers, CNC machines, a woodshop, a metal shop, and software and hardware experts in every field.

McNeal’s residency began in January of this year, and he credited his work during the residency as being integral in the development of the Scout, stating that "there is no way on earth the Scout would be as good as it is today if not for the great people and equipment I was able to work with on a daily basis at Pier 9."

Now that McNeal has completed his residency, the Scout’s design files and build specifications have been handed off to the MITRE Corporation, which supplies and tests a lot of the Marines’ UAS.

The MITRE Corporation will be responsible for carrying the Scout through the certification process and possibly, wider-scale manufacturing.

In Eastern Iowa, the Allamakee County Sheriff's office enlisted the help of the Decorah Fire Department and its UAS to help locate six people who were stranded along the Yellow River near Effigy Mounds, after they got lost while tubing.

It took just 10 minutes for the UAS to locate the first three of the six stranded, after they were spotted using a heat seeking camera that was attached to the UAS.

Decorah Firefighter Zack Kerndt, who was at home when he got the call to put his UAS skills to work, says that a foot-search for the missing people would have been very difficult, which made the UAS that much more valuable.

"With the vegetation off of a tree because a tree is a living thing so it is producing heat and you cannot see through the canopy cover," Kerndt says via KCRG.com.

"So luckily they were on the river bank and we were able to spot them."

A two-way radio tied to the UAS was used to locate the three remaining missing people, after it was dropped down and used to communicate with the stranded people who had already been found.

"Without that radio getting to them we wouldn't have known that there were three other people that were actually on the river with them," Kerndt adds.

​All six of the missing people were deemed healthy upon being found.

"We're looking at actually purchasing one down the road. I know a lot of counties in Iowa are doing that now," Snitker says.

"Especially given our terrain we have a lot of recreational people. We have a state park. So we have people who are in heavy vegetative areas. With our hills and ridge lines it's very easy for somebody to get lost." 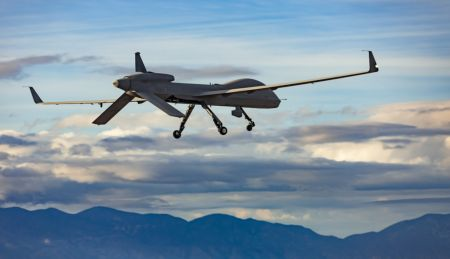 The UAS flew out of El Mirage, California in a "representative U.S. Army mission configuration."

"The MQ-1C ER represents a significant enhancement in capability over the currently fielded MQ-1C and will be a game changer on the battlefield in support of our Army customer."

This month, the MQ-1C ER production aircraft will begin flight testing for evaluation of the Army's First Article Test (FAT).

​FAT will demonstrate the mission capabilities of the MQ-1C ER, which include increased range, payload capacity and endurance.

The MQ-1C ER will go through Logistics Demonstration (Log Demo) in January 2018. During the Log Demo, aircraft maintainability will be validated.

In March 2018, Follow-on Operational Test and Evaluation2 (FOTE2) will showcase the aircraft’s ability to "meet all Army operational requirements in preparation for fielding," which is planned for August 2018.