This week’s roundup from the Association for Unmanned Vehicle Systems International (AUVSI), which highlights some of the latest news and headlines in unmanned vehicles and robotics, covers drones that were deployed in Hurricane Harvey recovery efforts, drones used to send urgent medical supplies, and drones that were used in beyond visual line of sight testing along powerline infrastructure.

This week’s roundup from the Association for Unmanned Vehicle Systems International (AUVSI), which highlights some of the latest news and headlines in unmanned vehicles and robotics, covers drones that were deployed in Hurricane Harvey recovery efforts, drones used to send urgent medical supplies, and drones that were used in beyond visual line of sight testing along powerline infrastructure.

The destruction caused by Hurricane Harvey has made UAS especially valuable during the recovery efforts in the aftermath of the massive storm.

Since the storm hit Texas and Louisiana during the last week of August, the FAA has issued more than 100 "separate authorizations for emergency drone activities" above heavily flooded areas such as Houston.

According to industry officials, with the exception of a few flights flown by media outlets, all of the operations thus far have been conducted in coordination with, or on behalf of, local, state or federal agencies.

Via the Wall Street Journal, AUVSI President Brian Wynne says of UAS, "they’re being used in a lot of different ways we’ve been talking about for a long time."

Through the same Wall Street Journal article, it was reported that at least one company has received permission to "survey coastal damage using drones operating beyond the sight of ground-based pilots," according to people familiar with the details. This is important because under normal rules governing commercial operations, beyond line of sight operations are strictly banned.

In an effort to cut down on delays and bureaucratic processes, the FAA has issued some "single, blanket authorizations" to fly various types of UAS for different missions across the same designated airspace.

Initially, the FAA put a "temporary but extensive no-fly zone" over Houston to protect government helicopters and manned aircraft that were responding to Harvey as it dumped massive amounts of rain over parts of Texas, which meant that all UAS operations were prohibited without specific FAA approval.

The FAA warned that "flying an unauthorized drone could interfere" with official rescue and recovery efforts, and it added that operators "could be subject to significant fines if (they) interfere with emergency response."

Realizing that this storm was of a different magnitude and that more help was needed for recovery efforts, agency officials expedited case-by-case approvals to UAS operators for storm-related flights as Harvey dumped a historic amount of rain in Texas, especially in Houston.

Over many parts of Houston, UAS operations that seek to assist recovery efforts still require advance FAA approvals, since large parts of the airspace are reserved for traffic in and out of the two primary commercial airports in the region. 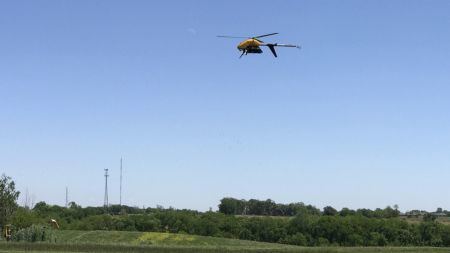 "Monitoring critical infrastructure, particularly those in rural areas beyond line of sight, can be done much more efficiently and effectively through the use of UAS technology," says Ken Schreder, vice president, Strategic Programs, Information Management Services at Rockwell Collins.

"We’ve created a mobile BVLOS system with networked command and control capability which enables us to demonstrate the benefits to infrastructure customers."

The companies used knowledge that they gained from participating in the FAA Focus Area Pathfinder BNSF Railway program, and they applied a similar safety case to demonstrate that the Rockwell Collins’ CNPC-1000 Command and Control data link and webUAS operations management technology are usable in other industries with "long linear operations," such as inspecting several miles' worth of power lines.

​For this flight, the temporary network that enabled the CNPC-1000 radio connectivity was engineered, designed and procured by Black & Veatch, and Black & Veatch was also involved in a "joint project management effort with Ameren to coordinate all the various parties involved in the test flights."

Safety observers from the Northern Plains UAS Test Site and the University of Iowa’s Operator Performance Laboratory (OPL) supported the demonstration, and the OPL worked with Rockwell Collins on the integration of the CNPC-1000 into the test vehicle, and the UAS' configuration and flying for the demonstration.

The Rockwell Collins data link, which is designated the CNPC-1000, "conforms to the industry-developed performance standard for command and control submitted to the FAA by the RTCA Special Committee 228 for commercial UAS operations in the national airspace."

Along with the FAA and NASA, Rockwell Collins has flown the CNPC-1000 on several different aircraft.

For this demonstration, the CNPC-1000 was modified to "support low altitude BVLOS operations in support of critical infrastructure monitoring to radio frequency spectrum beyond the frequencies cited by SC-228."

LLamasoft, which provides supply chain optimization technology, has partnered with Zipline, which operates the world’s only UAS delivery system of national scale, and sends urgent medical supplies to patients regardless of their location.

The two companies have been working together to simulate Zipline’s operations, and evaluate the cost and performance benefits that LLamasoft’s technology can bring to existing public health supply chains.

Since last October, Zipline has been operating in Rwanda, and the company is preparing to expand its operations into Tanzania.

During their collaboration, Zipline has relied on LLamasoft to analyze its operations in Rwanda and Tanzania. Zipline plans to operate four distribution centers in Tanzania, with the first being in the country’s capital, Dodoma. LLamasoft is currently helping Zipline design its Dodoma operations.

"As Zipline builds the agile supply chain of the future, LLamasoft’s expertise in supply chain modeling and optimization has been extremely valuable," says Will Hetzler, co-founder of Zipline.

"LLamasoft is widely respected in the global health community, and they already worked to optimize portions of the public health supply chains in many of the countries where Zipline plans to operate. LLamasoft’s familiarity and credibility with these health systems has helped Zipline communicate the value of our services."

In recent years, LLamasoft’s global impact team and the Tanzanian Ministry of Health and Medical Stores Department have worked together on other supply chain projects, such as a transportation optimization project and a strategic review of their supply chain.

​LLamasoft will use this experience to help Zipline "maximize the benefit of their integration into the Tanzanian public health supply chain."

"We at LLamasoft’s Global Impact Team are excited to be working with Zipline to quantify the expected value they can bring to public health supply chains and to help design their operations," says Sid Rupani, Regional Director for LLamasoft IMEA.

"This collaboration fits squarely into our mission as a prime example of a fascinating supply chain design problem and one that could potentially deliver great positive social impact."