In this week’s article from the Association for Unmanned Vehicle Systems International (AUVSI), which highlights some of the latest news and headlines in unmanned vehicles and robotics, we take a look at the Swiss postal service’s use of unmanned aerial systems (UAS) to deliver lab samples between hospitals, a drone that monitors pirate activity, an identification framework for UAS from DJI, and a successful aerial package delivery.

In this week’s article from the Association for Unmanned Vehicle Systems International (AUVSI), which highlights some of the latest news and headlines in unmanned vehicles and robotics, we take a look at the Swiss postal service’s use of unmanned aerial systems (UAS) to deliver lab samples between hospitals, a drone that monitors pirate activity, an identification framework for UAS from DJI, and a successful aerial package delivery. 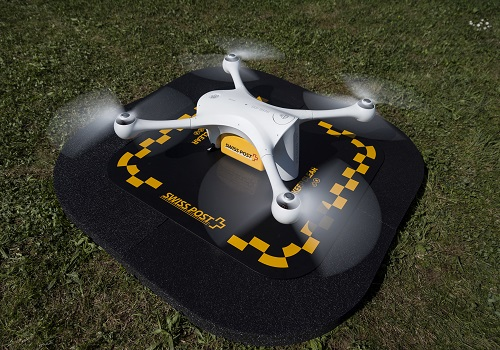 Since the middle of March, the Swiss postal service has been using UAS to deliver laboratory samples between two hospitals in Lugano, Switzerland, near the Italian border.

Since beginning operation, the UAS, built by California-based UAS company Matternet, have completed around 70 successful flights.

With permission from the Swiss aviation authority to conduct the flights, the UAS are loaded with materials from the hospital staff, who send the UAS off by pressing a button on an app.

Once the UAS reach their destination and touch the ground, the packages are released. Each hospital has takeoff and landing pads outside of their buildings, and the takeoffs and landings of the flights are guided using infrared sensors.

While the UAS fly completely autonomously without a pilot, Matternet has personnel monitoring the flights from a remote location just to make sure everything goes smoothly.

"The regular use of drones between the two hospitals will become an everyday occurrence. Trained hospital staff will be able to load the drone independently with a safety box (in which the lab samples are packaged) and launch the drone with a smartphone application,"Swiss Post said in a press release. "The drone will then fly autonomously along the predefined route to its destination, where the box will be received by another member of staff."

The European Union Naval Force ATALANTA (EU NAVFOR) has announced that Insitu’s ScanEagle UAS is being used to monitor pirate activity off of Somalia’s coastline. The ScanEagle has a flight time of 18 hours, and is operational during both day and night.

As a part of "Operation Atalanta"off of the Somali coast, a crew from Spain’s 11th Squadron is using the UAS for air surveillance and reconnaissance missions. The UAS is catapulted off the deck of the ESPS Galicia boat, using a "super wedge"launcher system. The UAS is recovered using a maritime skyhook retrieval system.

This is the third time that the UAS has been deployed with Operation Atalanta, and the second time it has been onboard the ESPS Galicia.

DJI has proposed an electronic identification framework for UAS that would give authorities in the United States the ability to identify UAS users when necessary, while simultaneously respecting the privacy of those users.

In DJI’s concept, inexpensive radio equipment aboard many of today’s UAS would be used to transmit the location of a UAS, as well as its registration number or similar identification code.

Law enforcement officials or aviation regulators would be the only people that can use the registration number to identify a UAS user. DJI says that its system would work similarly to automotive license plates work.

"DJI understands that accountability is a key part of responsible drone use, and we have outlined a proposal that balances the privacy of drone operators with the legitimate concerns authorities have about some drone operations,"says DJI Vice President of Policy and Legal Affairs Brendan Schulman.

"This is another example of how the UAS industry is innovating solutions to emerging concerns, and we look forward to working with other stakeholders on how to implement the best possible system." 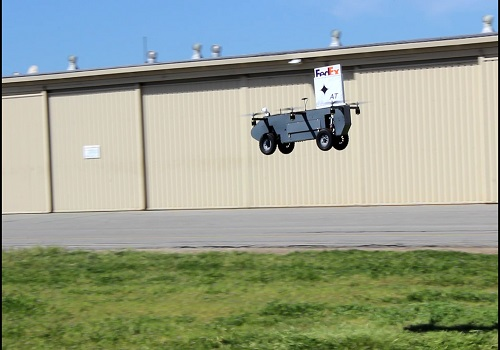 Advanced Tactics Inc. (AT) announced it has successfully completed its first aerial package delivery test, using its Panther sUAS Air/Ground Robot, which can operate as a UAS, and once on the ground, operate as a UGV.

During the test, the battery-powered Panther flew to its location, landed, and drove to the doorstep of a Torrance, California, man to deliver a package.

With the original thought of developing air/ground robot technology that can aid U.S. military forces, AT began working on this technology 10 years ago. Now, the company has developed its signature system, the Panther UAS/UGV, which is capable of not just delivering packages, but also extended surveillance.

The Panther has both vertical takeoff and landing and off-road driving capabilities, making it one of the more unique systems on the market. Besides its ability to operate as both a UAS and a UGV, some of the features that make the Panther stand out from other technologies are its ability to lift a payload as heavy as 15 pounds, and its autonomous waypoint navigation, which helps it travel on its own.