Harvard University researchers discover a method by which special optics or image sensors are no longer required to see polarized light. 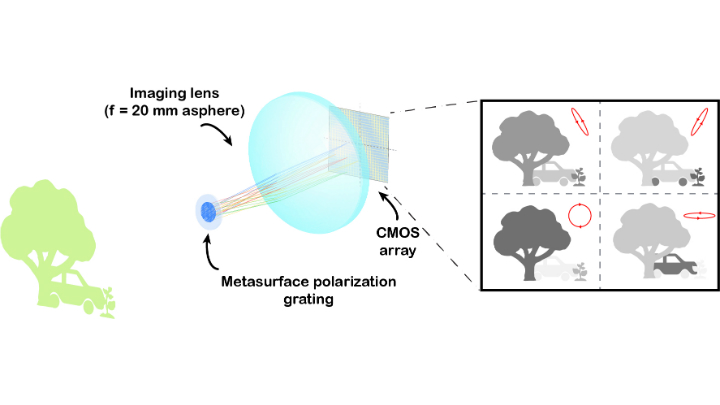 Polarized light is light in which waves travel in only one, specific direction. Traditional polarization techniques used in photography and machine vision employ linear polarization filters which could be described conceptually as a slot that is rotated to only allow light on a desired polarization to pass through. Removing the undesired light waves produces a sharper image.

The fundamental physical nature of polarized light is actually an ellipse, not a straight line, and so linear polarizers cannot determine the “full” polarization state of light, i.e. its angular orientation, how elliptical it is, and the degree to which the light is polarized. The new filter designed by Harvard University researchers is designed to measure the full polarization state of light by not depending on linear polarizers.

Described in the research paper as a nanoscale metasurface or a diffraction grating, the new filter is composed of rectangular pillars of titanium dioxide that are separated by around 400 nm. Rather than absorbing some polarizations of light and allowing others to pass, the pillars in the metasurface instead rearrange the light to allow for the simultaneous creation of multiple images that are combined into a single image that captures the full polarization of the light.

The result is the ability to image polarized light without special optics, which could make polarization possible on much smaller cameras than is currently possible. Smartphone cameras might be able to create polarized images, for example, if a metasurface is placed in front of the lens.

Researchers believe that imaging circular polarization may assist in mapping material stress, a common use of polarization in machine vision. They also believe that the metasurface would be useful for deployment on satellites or probes where small sensors are desirable.