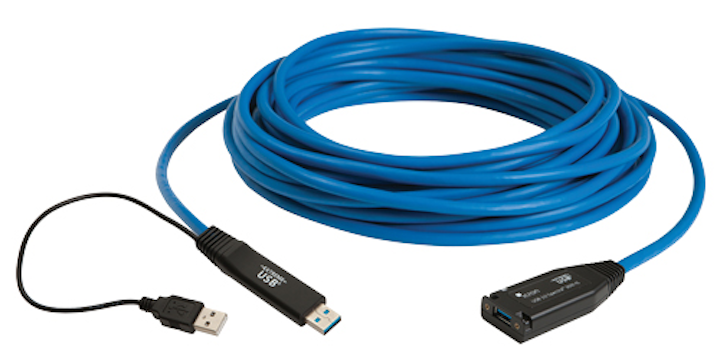 In choosing cameras for machine vision applications, systems integrators are faced with a number of options ranging from the resolution of the image sensor, the data rate required and the types of lenses needed. These choices are compounded by the number of different and emerging standards that exist for camera-to-computer connections, each of which has its own price/performance trade-offs. Such standards include networking based interfaces such as Gigabit Ethernet, bus-based designs such as USB3 Vision or point-to-point protocols such as Camera Link, Camera Link HS (CLHS) and CoaXPress (CXP).

Two important considerations in choosing an interface are the maximum bandwidth or data rate that can be achieved and the maximum theoretical cable length that can be achieved (see "Cameras and camera interfaces span the bandwidth spectrum",Vision Systems Design, February 2017; http://bit.ly/VSD-1702-1). While useful, such comparisons can be confusing since, as Michael Miethig, Chair, Camera Link HS Committee and Development Manager, Camera R&D at Teledyne DALSA (Waterloo, ON, Canada; www.teledyne.com) pointed out in his Letter to the Editor, the emergence of active optical cables and fiber interfaces is now blurring the picture (see "Letter to the Editor," Vision Systems Design, March 2017, http://bit.ly/VSD-1703-7).

While all camera-to-computer interface standards are documented by the AIA (Ann Arbor, MI, USA;www.visiononline.org) in publications such as "Global Machine Vision Interface Standards"(http://bit.ly/VSD-GMVS), such documents do not discuss the products that can be used to extend the maximum camera-to-computer distances.

Using passive copper cable, each standard has its own limitations. For USB 3 Vision, for example, this is specified as 3-5m, for GigE Vision up to 100m, for Camera Link 7-15m, for CLHS 7-15m and for CXP-6 (6.25 Gbits/s), 35m. For each of these camera interfaces, longer camera-to-computer extensions can be accomplished in a number of ways that include active cables, active optical cables (AOCs), optical repeaters, and fiber-based camera and fiber-based frame grabbers each of which, like the cameras and camera interfaces themselves, have different price/performance trade-offs.

For each of the most popular camera interfaces, active copper cables can be used to extend the distance achievable. These active copper cables use analog ICs integrated within cable connector modules to compensate for the signal degradation associated with passive copper-based cables. As Gourgen Oganessyan and Michael Vrazel of Intersil (Milpitas, CA, USA;www.intersil.com) point out in "Active Cable Interconnects for High-Speed Serial Communications" (http://bit.ly/VSD-ACTCAB), such active cables can be an alternative to passive copper cables and optical transceivers since they offer greater reach by up to a factor of two or three (depending on the protocol) and thinner gauge than passive cables, pushing out the point at which optical transceivers are required.

For system designers, such active cables are available that support a number of different standards. To extend USB3 connections, for example, the USB 3.0 Spectra 3001-15 from Icron Technologies (Burnaby, BC, Canada;www.icron.com) is a single-port USB 3.0 SuperSpeed active 15m copper extension cable that supports a throughput of 5Gbps and delivers 900mA (Figure 1). Like Icron, Newnex (Santa Clara, CA, USA; www.newnex.com) also offers an active cable extender, the FireNEX-uLINK that extends USB3 Vision camera to computer distances to 12m and requires no external power source.

Active cables are also used to extend interface standards such as Camera Link. Andor (Belfast, UK;www.andor.com), for example, has shown how to extend the maximum cable distance between the company's Neo and Zyla sCMOS cameras and a frame grabber to lengths of up to 10m using the BIT MAXX active Camera Link cable from Components Express Inc. (CEI; Woodridge, IL, USA; www.componentsexpress.com). Depending on the bandwidth requirements of the Camera Link camera, however, the BIT MAXX cable can be used to extend this distance further (http://bit.ly/VSD-BITMAXX).

For those deploying cameras using standard networking protocols, there may be no need to deploy active cables since the GigE Vision standard specifies a cable length of up to 100m can be used. However, in Ethernet-based systems, active cables may be required since passive Ethernet cables will transfer camera data without amplification or equalization – a process that may or may not be performed by the Ethernet switch. According to Amphenol (Wallingford, CT, USA;www.amphenol.com), switches with so-called "dumb" SFP+ ports, for example, need active SFP+ cables powered by the switch to amplify and equalize data signals (see "SFP+ Direct Attach Copper Cables: Passive or Active?"; http://bit.ly/VSD-AMPH).

While 10GBaseT cameras such as the HT Series of 10GBaseT CMOS area scan cameras from Emergent Vision Technologies (Maple Ridge, BC, Canada; https://emergentvisiontec.com) use RJ45 connectors with copper cable for camera to computer connections of between 1-100m distances, the company uses the SFP+ connector in its HR camera series to support much greater camera to cable interface lengths (Figure 2).

Currently the most common type of 10Gbit Ethernet cable is the 10GBase-SR fiber-optic cable that supports an SFP+ connector with an optical transceiver rated for 10Gbits/s (see "Cabling Guide for 10GbE Network Adapters,"http://bit.ly/VSD-CABG). To support cameras based on the 10Gbit Ethernet standard, companies such as Kaya Instruments (Haifa, Israel; www.kayainstruments.com) use the SFP+ connector in its Komodo 10GigE Vision Frame Grabber (Figure 3).

While its cameras could use SFP+ connectors, Paul Kozik, Product Manager at FLIR Integrated Imaging Solutions points out that the 10GBase-CX1 SFP+ copper standard has a maximum camera-to-computer distance of 10m as opposed to using an RJ45 connector and copper cable which allows 100m distances to be achieved. A PowerPoint presentation on the differences between RJ45 and SFP+ and the company's camera can be found athttp://bit.ly/VSD-10GigE.

Having said that, SFP+ interfaces are useful in applications where distances must be extended substantially further using optical fiber, as realized by Emergent Vision Technologies in its HR camera series. A video showing the robustness of modern fiber cabling and the ease of field optical termination is available athttp://bit.ly/VSD-TDVid.

While active optical cables (AOCs) accept the same electrical inputs as traditional copper cable connectors, they use optical fiber between the camera and the computer. At present, though more expensive than passive cables, AOCs offer systems developers the opportunity to increase camera-to-computer distances without sacrificing compatibility with standard electrical interfaces.

For a number of years, optical extenders were used to accomplish this task. What is now emerging, however, are cameras and frame grabbers that eliminate the need for optical extenders, by incorporating fiber connectors directly onto cameras and frame grabbers. Needless to say, however, that should any such fiber implementation be chosen, cameras will need to be powered locally. Such implementations do have their advantages however since the camera cables are not as bulky, data bandwidth is higher and any electromagnetic interference (EMI) is eliminated.

For designers of machine vision systems, numerous companies now offer AOCs that are compatible with popular vision interfaces. To support the USB Vision and standard, for example, Oki Electric Cable (Kawasaki, Japan;www.okidensen.co.jp) has developed an AOC that allows data transmission distances over USB3 of up to 20m. For Camera Link extensions that require power over cable configurations, Fujikura (Tokyo, Japan; www.fujikura.co.jp) has produced an AOC using an optical fiber/metal hybrid cable that supports both Base and Medium Camera Link configurations that can be used for Power over Camera Link (PoCL) systems at speeds of 85MHz at up to 100m.

For CXP, the currently supported data rates of up to 6.25Gbps per cable (CXP-6) will be extended in version 2 of the standard to 10Gbps (CXP-10) and 12.5Gbps (CXP-12). While the long term roadmap calls for an optical interface, this must currently be accomplished using separate units such as the CoaXPress Multiplexer over Fiber unit from KAYA Instruments that allows data to be streamed from up to four CXP channels over a single fiber.

Other interfaces such as CLHS can also be extended using AOCs. Of the two CLHS protocols, the M core currently supports 3.125 Gbits/s per lane while the X protocol supports speeds of 10.3 Gbits/s per lane. The M protocol specifies using a CX4 connector and is often used to transfer data over copper cable. This has been implemented in frame grabbers from Matrox Imaging (Dorval, QC, Canada;www.matrox.com) and Teledyne DALSA. AOCs from companies such as Alysium (Nuremberg, Germany; www.alysium.com) and Hirakawa Hewtec (Tokyo, Japan; www.hewtech.co.jp), can extend this distance further. Indeed, over two years ago, Teledyne DALSA demonstrated its Pirahna XL CMOS TDI cameras interfaced to the company's Xtium-CLHS PX4 using a CX4 AOC (see "Frame grabbers offer extended interface capabilities," Vision Systems Design, http://bit.ly/VSD-1607-1). At last year's VISION show in Stuttgart, the Hewtech cable was shown to transfer data over 30m through 7 lanes at 5 Gbps/ lane for an effective bandwidth of 3.3 GByte/s in a single 5mm cable.

Using the SFP+ interface, however, allows direct attach passive copper-based cable to be used for distances from 1-10m, SFP+ multi-mode fiber modules/transceivers for distances of 1-300m and SFP+ single-mode fiber modules/transceivers for multiple kilometer distances. It should be noted that field termination of fiber cables is a very quick process due to the innovations achieved in fiber to the home. Today, a number of companies offer frame grabbers to support the CLHS standard using SFP+ connectors. Teledyne DALSA uses the SFP+ connection with the M protocol for custom cameras and frame grabbers and showed a prototype X protocol camera and frame grabber at last year's VISION show. The 64/66 encoding with Forward Error Correction used in the X protocol results in a 25% improvement in bandwidth over 8b/10b encoding, enabling more data throughput at a given bit rate: 1200MByte/s for 10.3Gbps for CLHS protocol.

While the use of optical interfaces have benefits such as long distance data transmission and lack of signal degradation due to EMI, such cables often do not supply power to the camera unless optical fiber/metal hybrid cables are used. However, it is possible to transmit power over fiber. In 2012, scientists from Sandia National Laboratories (Albuquerque, NM, USA;www.sandia.gov) invented one of the earliest power-over-fiber systems, using laser diodes and miniature photovoltaic cells.

In 2015, Associate Professor Motoharu Matsuura and his colleagues at the University of Electro-Communications (Chou, Japan;www.uec.ac.jp) demonstrated a fiber-optic system capable of transmitting 60W over 300m (see "Fiber Optics Transmit Data and Power Over Same Cable," Electronic Design, January 2016, http://bit.ly/VSD-FibOp. However, while future developments may make power over fiber-optic cable a reality, todays designers of machine vision systems have many other interface options from which to choose.

Resources on the web

Image processing in the age of 10 Gigabit Ethernet
http://bit.ly/VSD-1705-PF6