A team of physicists at Heriot-Watt University (Edinburgh, Scotland, UK) has developed a system that can capture 3-D images from up to a kilometer away. 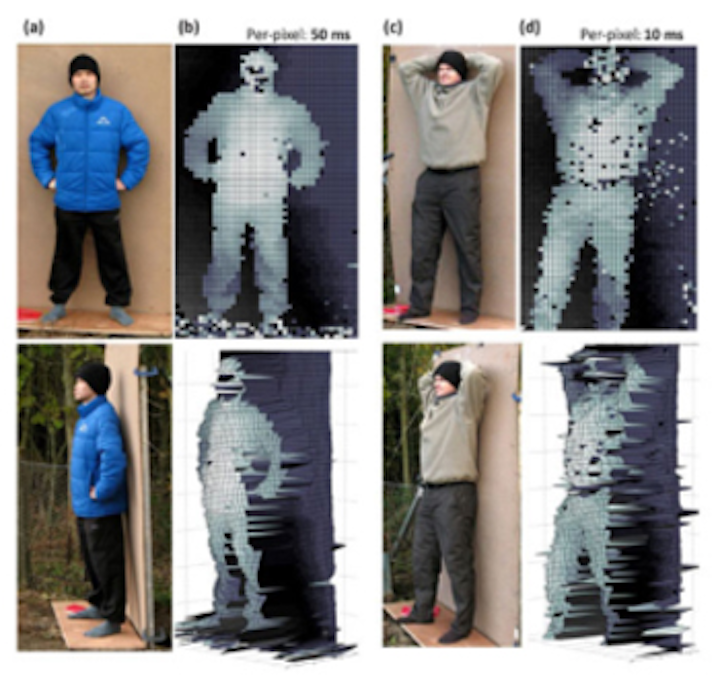 A team of physicists atHeriot-Watt University (Edinburgh, Scotland, UK) has developed a system that can capture 3-D images from up to a kilometer away.

The system obtains 3-D information by bouncing a laser beam off objects and measuring how long it takes the light to travel back to a detector. The technique, called time-of-flight (ToF), is already used in machine vision navigation systems for autonomous vehicles and other applications, but many current ToF systems have a relatively short range and struggle to image certain objects.

Led by Professor Gerald Buller from the School of Engineering and Physical Sciences, the Heriot-Watt team system captures laser pulses from ‘uncooperative’ objects that do not easily reflect laser pulses, such as fabric, making it useful in a wide variety of field situations.

The system works by sweeping a low-power infrared laser beam rapidly over an object. It then records, pixel-by-pixel, the round-trip flight time of the photons in the beam as they bounce off the object and arrive back at the source. The system can resolve depth on the millimeter scale over long distances using a detector that counts individual photons.

The primary use of the system is likely to be scanning static objects such as vehicles. With some modifications to the image-processing software, it could also determine their speed and direction.

"Our approach gives a low-power route to the depth imaging of ordinary, small targets at very long range. While it is possible that other depth-ranging techniques will match or out-perform some characteristics of these measurements, this single-photon counting approach gives a unique trade-off between depth resolution, range, data-acquisition time and laser-power levels," says Dr. Aongus McCarthy, a research fellow at Heriot-Watt University.

The system is particularly good at identifying objects hidden behind clutter, such as foliage. However, it cannot render human faces, instead drawing them as dark, featureless areas as, at the long wavelength used by the system, human skin does not bounce back a large enough number of transmitted photons to obtain a depth measurement.

The light the team has chosen has a wavelength of 1,560 nanometers, longer, or ’redder’, than visible light, and thus it travels more easily through the atmosphere, is not drowned out by sunlight, and is safe for eyes. Many previous ToF systems could not detect the extra-long wavelengths that the team's device is specially designed to sense.

Outside of object identification, photon-counting depth imaging could be used for a number of scientific purposes, including the remote examination of the health and volume of vegetation and the movement of rock faces, to assess potential hazards.

Ultimately, McCarthy says, it has the potential to scan and image objects located as far as 10 kilometers away. "It is clear that the system would have to be miniaturized and made more rugged, but we believe that a lightweight, fully portable scanning depth imager is possible and could be a product in less than five years."

Related items from Vision Systems Design that you might also find of interest.

Italian researchers from the Politechnico Di Torino (Torino, Italy) have conducted a study to compare the performance of two Time-of-Flight (ToF) cameras.

A new paperback book from Springer describes the physical principles, the hardware architecture, and the electronic design of time-of-flight (TOF) cameras.