Click here to learn about how Zeta Instruments developed the Zeta-20, which is built on a new, patented optical technique called ZDot that utilizes a machine vision camera, LED lighting, a custom pattern generator, and additional optics and components to capture and analyze images of difficult to measure surfaces in a way that is not possible with traditional techniques. 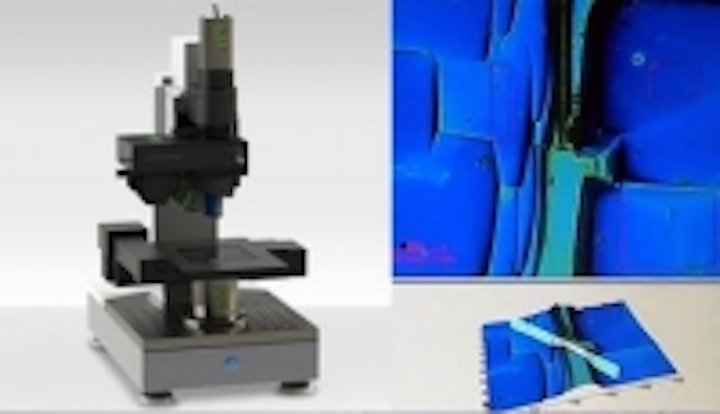 In order to create3D images of samples using an optical profiler, Zeta Instruments developed the Zeta-20, which is built on a new, patented optical technique called ZDot that utilizes a machine vision camera, LED lighting, a custom pattern generator, and additional optics and components to capture and analyze images of difficult to measure surfaces in a way that is not possible with traditional techniques.

Zeta Instruments’ Zeta-20 is built on a solid optical base plate with threaded holes that provide flexibility for users to place any sample to be analyzed under a choice of objectivelenses. Using lenses with different magnification, users can immediately see the effect on the field of view of the sample captured by the instrument while also visualizing the depth of focus which changes with the numerical aperture of the actual objective that is used.

In order to create a 3D image, a sample is illuminated by high-intensity white LED lighting to preserve color, and the relative distance between the sample and the objective lens chosen by the user is then moved underPC control through a number of pre-determined steps by a precision closed loop z-drive fitted with rotary and linear encoders. At each step, a custom built electronic pattern generator projects a pattern of dots onto the focal plane of the objective lens, and an image is captured of the sample by a GS3-U3-28S5C color camera from Point Grey. The USB3 Grasshopper camera features a 2/3”, 2.8 MPixel Sony ICX674 CCD image sensor with a 4.54 µm pixel size that can achieve frame rates of 26 fps.

The pattern is then removed from the focal plane of the instrument, and a second image of the sample is captured by the camera. Both sets of images captured at each step are then transferred to a PC over theUSB3 Vision interface, where a proprietary software algorithm analyzes the images to create a true color 3D image and a 2D composite image of the sample.