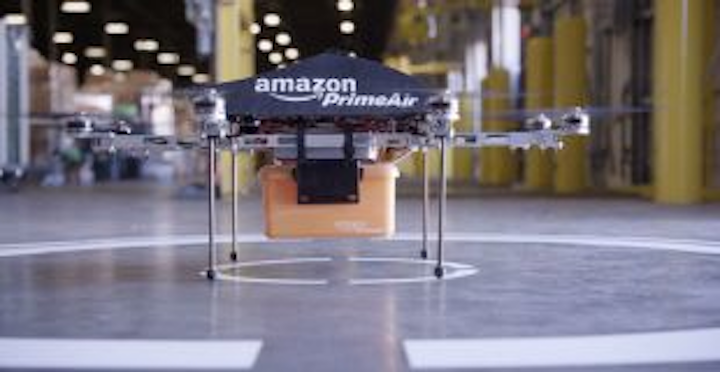 Two-day shipping is already guaranteed by Amazon, but what about same-day, perhaps even same-hour delivery?

Amazon’s Prime Air service would see unmanned aerial vehicles (UAVs), or drones, deploy packages under five pounds (2.3 kg) to customers within a 10 mile (16 km) radius of Amazon fulfillment centers. In other words, it will drop off your latest impulse purchase right at your doorstep. (Check out a video here.)

The UAVs mentioned, referred to as Prime Air vehicles, would be custom-built octocopters which I assume would be vision-enabled to avoid obstacles and arrive at the correct location. However, that’s not all it would need. For this to really be successful, the unit would need to be equipped with visible and infrared sensors, GPS and INS units, and a large battery. With this, the added weight would necessitate the creation of a larger and heavier unit, which leads to another obstacle, namely sky traffic.

A rather sophisticated air traffic control system would need to be developed to prevent these (likely expensive) UAVs from crashing into one another. Now, I’m not necessarily saying such UAVs would not work, but there are a number of existing issues that need to overcome before they ever became practical. Additional problems may include potential vandalism and pushback from consumers on privacy violations and from the USPS, UPS, and FedEx.

However, if any company is going to do it, it would likely be a megacorporation with the resources that Amazon has. It’s not as if using UAVs in the city has never been accomplished (see here) and, Amazon has until at least 2015, when the FAA says that civilian drone use in US airspace may become a possibility.

What do you think? Is this a (smart) publicity stunt, or could this actually work?