ATLAS, the humanoid robot with functioning limbs and hands, recently received from programming updates via a new algorithm from the Florida Institute for Human and Machine Cognition (IHMC), which enables it to walk like a human with more agility and control than ever before. 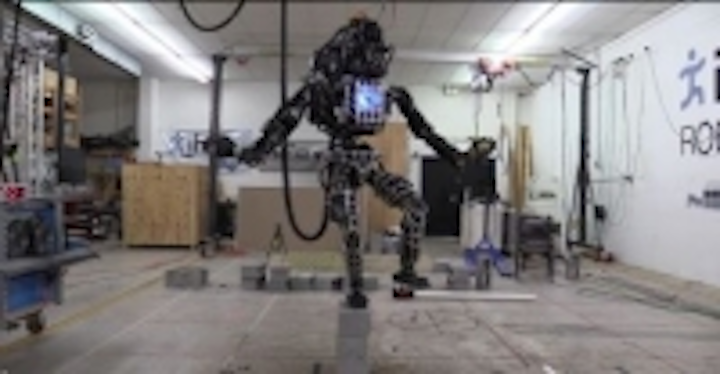 ATLAS, the humanoid robot with functioning limbs and hands, recently received from programming updates via a new algorithm from the Florida Institute for Human and Machine Cognition (IHMC), which enables it to walk like a human with more agility and control than ever before.

Google and the robot revolution

Built by the Google-owned Boston Dynamics, with funding and oversight from the United States Defense Advanced Research Projects Agency (DARPA), the robot features a head-mounted MultiSense-SL 3D data sensor package, which is comprised of a Hokuyo UTM-30LX-EW laser and a Carnegie Robotics MultiSense S7 stereo camera. The camera is fitted with either a 2 MPixel CMV2000 or 4 MPixel CMV4000 CMOS image sensor from CMOSIS. These sensors feature a Bayer color filter array and achieve a maximum frame rate of 30 fps.

The ATLAS robot has four hydraulically-actuated limbs, blue LED illumination, and is made of aircraft-grade aluminum and titanium. Standing at 6 feet tall and weighing 330 pounds, the robot was designed for a variety of search and rescue missions. During DARPA’s Robotics Challenge, ATLAS “shell” robots (robots without a “brain”), were provided to six teams to test the robot's ability to perform various tasks, including getting in and out of a vehicle and driving it, opening a door, and using a power tool. The contest was inspired by the 2011 Fukushima Daiichi nuclear disaster, which represents a possible future scenario in which the ATLAS robot could be used