Vision system heads to the beach

A spin-out from the National and Kapodistrian University of Athens (Athens, Greece) has developed a vision-based system for tracking the ball in a beach racket game. 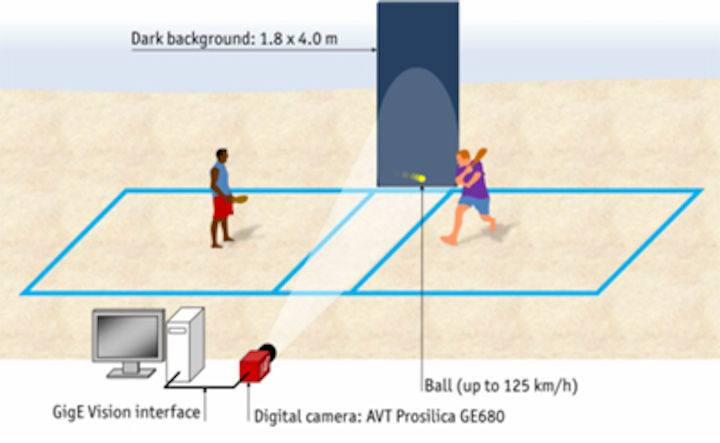 Vision system heads to the beach

Engineers working at a National and Kapodistrian University of Athens (Athens, Greece) spin-out company called Mobics (Athens, Greece) have developed a vision-based system for tracking the ball in a beach racket game.

The design of such a system was complex, since the system had to operate on beaches in extreme weather conditions, such as temperatures over 50°C for more than eight hours and a lot of dust.

After much research, Mobics selected the AVT Prosilica GE680, a CCD camera with VGA resolution and a GigE Vision interface from Allied Vision Technologies (Stadtroda, Germany). The camera stands opposite a dark-colored background on which the position of the ball can be easily tracked and isolated from the camera's region of interest.

To track the rapidly moving balls, the camera captures images at 130 frames per second. This is the minimum frame rate required in order to capture at least 2 frames of the ball at maximum velocity in the center of the court, and then calculate its velocity. The OpenCV library was used for frame processing and implementation of the respective machine vision algorithms.

The system was successfully used in six official competitions of the 1st Pan-Hellenic Beach Racket Tournament during the summer of 2011.

“We actually went far beyond AVT’s specifications for the camera, with operating temperature above 50°C and a camera exposed to dust without any protective enclosure,” says Vassileios Tsetsos, Chief Technology Officer of Mobics. “In spite of that, the AVT Prosilica GE680 proved to be an extremely reliable camera for demanding applications.”