The hub-to-hub trip covered 2,800 miles from Tulare, California to Quakertown, Pennsylvania in less than three days 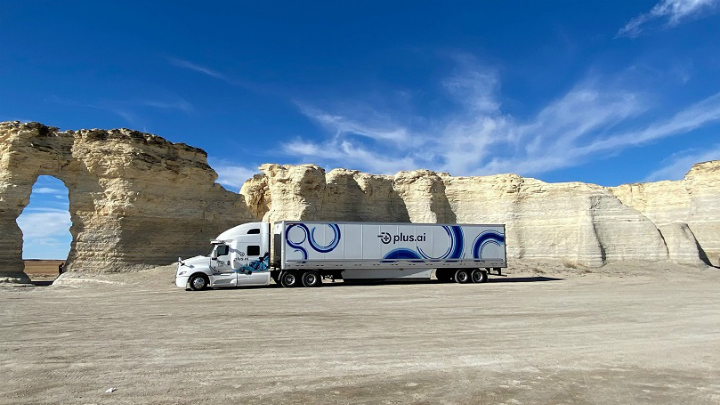 In this week’s roundup from the Association for Unmanned Vehicle Systems International, which highlights some of the latest news and headlines in unmanned vehicles and robotics, an successful autonomous truck run across the United States, the University of North Dakota celebrates a milestone in UAS research, and the United States Air Force Academy dazzles with a drone presentation.

“This cross-country freight run with Land O’Lakes shows the safety, efficiency and maturity of our autonomous trucks, which are already delivering freight for other partners several days a week,” says Shawn Kerrigan, COO and co-founder of Plus.ai.

“Continued advances in our autonomous trucks will make it possible for these quick cross-country runs to be the norm in the future. We are excited to demonstrate what our technology can already achieve today while meeting rigorous autonomous driving safety and food transportation compliance standards.”

The autonomous truck was equipped with Plus.ai’s advanced autonomous driving system, which uses a variety of software and technology including multimodal sensor fusion, deep learning visual algorithms, and simultaneous location and mapping (SLAM) technologies. The company says that the journey was “an important milestone in validating the system’s ability to safely handle a wide range of weather and road conditions.”

The vehicle drove primarily in autonomous mode during the cross-country journey, but a safety driver was on board during the entirety of the journey to monitor and assume control if necessary. A safety engineer was also present to monitor system operations.

“Self-driving and other emerging transportation technologies stand to completely reshape commercial shipping, so we are thrilled to collaborate with technology leaders like Plus.ai to pilot autonomous trucks for our shipping needs,” says Yone Dewberry, Land O’Lakes’ Chief Supply Chain officer.

“End of the year is a very busy time for us. To be able to address this peak demand with a fuel- and cost-effective freight transport solution will be tremendously valuable to our business.”

During the continuous cross-country journey, the Plus.ai autonomous truck safely operated during both the day and night through varying conditions including the expansive plains of Kansas, the winding roads of the Rockies, and at over 11,000 feet elevation. While heading east, the truck also encountered rainy and snowy roads. 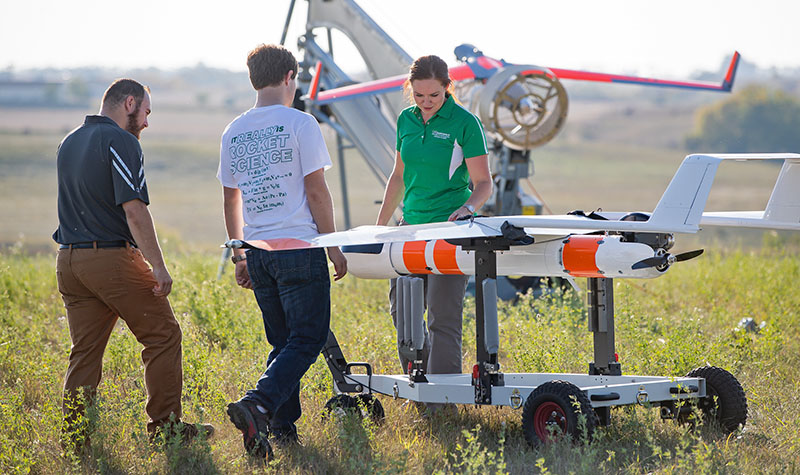 According to Al Palmer, the retired director of UND’s Aerospace UAS program, UND began planning its foray into UAS in 2005. To get “ahead of the coming UAS wave,” Ben Trapnell, associate professor of aviation, was tasked with creating an education program for UND Aerospace back in 2006.

Three years later in 2009, everyone was onboard with the program, which led to the State Board of Higher Education approving the program, and UND’s John D. Odegard School of Aerospace Sciences becoming the first university to offer a degree program in UAS operations.

The first five students graduated from the program with degrees in UAS operations in May 2011. All were commercial, instrument-rated pilots, and at least three of them remain employed in the UAS industry.

To date, 225 students have graduated from the University with UAS degrees. Currently, there are 159 students majoring in the subject.

“It has been an exciting ride to be a part of such an amazing organization and a group of people who are genuinely dedicated to aviation education, training and research,” Snyder says.

“We have seen an evolution in which UAS has become more and more prevalent. As it evolves, I believe we will see it converge in many ways with traditional commercial aviation.”

To keep up with an industry that is constantly evolving, UND's UAS curriculum has also evolved and adapted over the years, Snyder notes.

“Last year, we updated our curriculum to include additional courses to help prepare our students for the industry,” Snyder says.

“We added autonomous fundamentals, enabling concepts and counter-UAS courses. We improved courses to include more post-processing and data-collection experience. We also provided students with a choice of two tracks to specialize in the type of UAS operations they intend to pursue.”

To give commercial aviation students the ability to see how UAS are being used to transform the aviation industry, UND has also integrated the Simlat UAS Simulation into its curriculum. The Simulation allows students to train in simulated environments for commercial UAS missions such as inspecting pipelines, power lines, wind turbines and industrial facilities.

Another recent change also now requires all future UND Aerospace commercial aviation students to take the Introduction to UAS Operations class. According to Snyder, this speaks to the expected progress of UAS operating in the national airspace system.

“The integration of UAS into the national airspace system is going to happen,” Snyder says.

“Equally important, the technology and advancements in autonomous systems we are developing in UAS will make their way to manned aircraft. Students who want to be involved in traditional commercial aviation will need to understand what autonomous fundamentals mean, what issues we have in cyber security and how concepts like data links will be important to all pilots.” 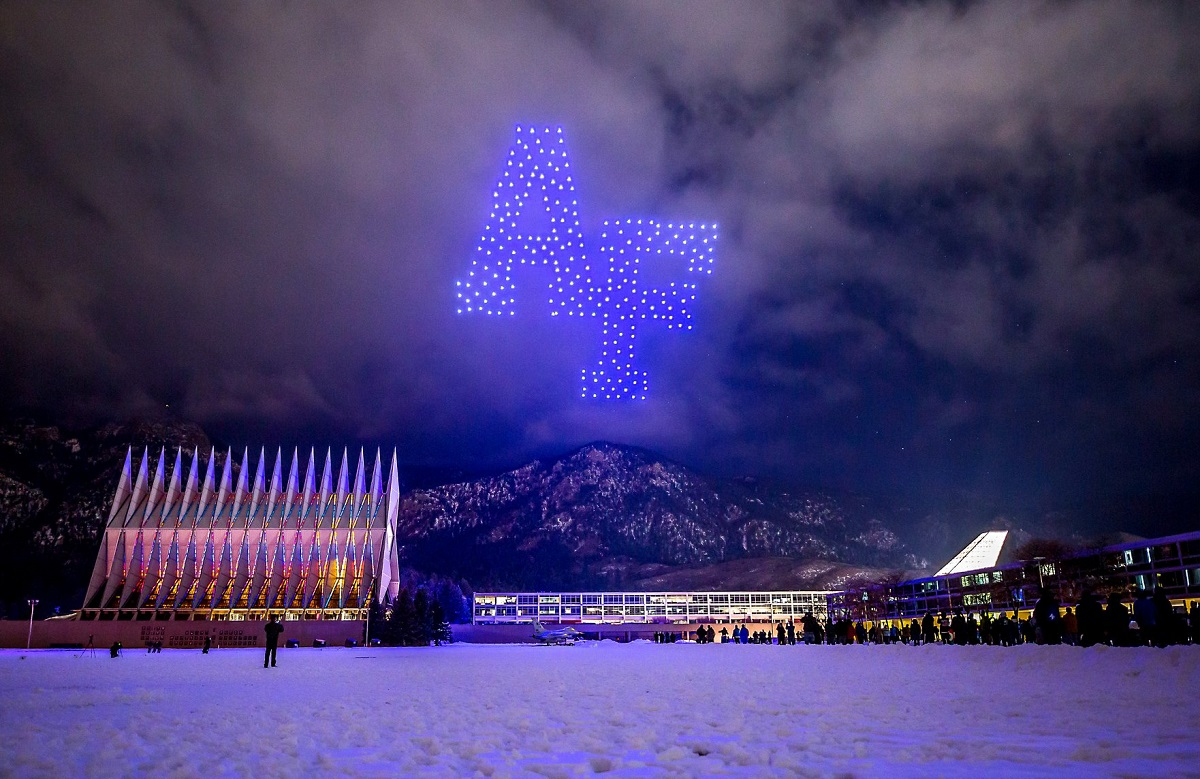 To celebrate its rivalry with West Point, the Air Force Academy held a multi-drone light show on its campus last month.

During the six-minute display, hundreds of UAS moved in synchronization, creating messages like ‘Beat Army.’ The demonstration showcased how far UAS have come since Civil War-era balloons, and what this technology is capable of.

“New and exciting aircraft shapes, sensor technology and even artificial technology capabilities are emerging from industry that will play a big role in how we execute future multi-domain operations.”

Experienced in flying UAS, as well as manned aircraft, Defendini says that UAS play an “unparalleled” role in providing a threat sight picture and putting effects into the battlespace. According to Defendini, the new test will be how to utilize UAS in contested environments as opposed to the anti-terrorism operations of the past 20 years.

“I try not to shape the argument too much with my own opinion on where we should go [with UASs] because I know it’s the upcoming generation, like the cadets we have here, who will innovate and drive our response to the challenges different adversaries will pose to our defense,” Defendini says.

During their time in the remotely piloted aircraft squadron at the Academy, cadets learn what a career as a rated Air Force officer would entail from hands-on experience flying aircraft to mission planning and training junior cadets on complex tasks.

Part of what makes the Air Force’s UAS program unique is its air operations center immersion capstone and the horizontal integration of research programs underway in academic departments like computer engineering.

“We are exposing the cadets to these emerging technologies and challenging them to consider how they would be fielded in a dynamic setting,” Defendini says.