On many passenger vehicles, four clips, known as roof mole clips, secure weather-proofing strips above each of the four doors. 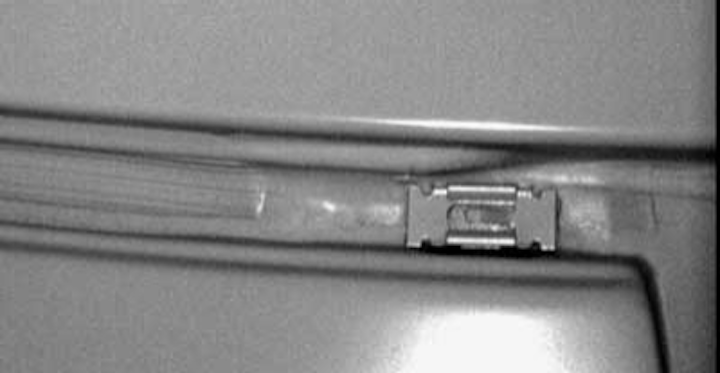 On many passenger vehicles, four clips, known as roof mole clips, secure weather-proofing strips above each of the four doors. Improper assembly of the clips can cause interruption of vehicle sequencing and expensive hand reworking, resulting in increased downtime and lost revenue. Indeed, approximately six in every 1000 vehicles can contain these incorrectly oriented or mismatched clips, or they may even be absent, despite manual inspection.

To eliminate this problem and its effects on downtime further along the production line, one automotive manufacturer has installed a machine-vision system based on an off-the-shelfsmart camera.

To test the viability of the application, a single Sharpshootervision sensor from Balluff (Florence, KY, USA; www.balluff.com) was installed on the production line to inspect the clip on the front driver’s side. Mounted above the production line, this single sensor was used to detect the clip’s presence and orientation of two vehicle types, with multiple paint variations and possible clip movement of as much as ±0.75 in.

In the final system, four Sharpshooters were mounted above the production line to inspect each of the two front and two rear end clips (see Fig. 1). Because of the difference in location of the rear clips between the two car models, a separate Sharpshooter was required at each clip’s position to guarantee accurate results.

As the automotive assembly frames emerge from the paint ovens on the production line, the model and color of each vehicle present must first be determined. To accomplish this, a Balluff BOS 18K-1LOC laser sensor is used to detect which primer color is used, and a Balluff BOD 66M laser distance sensor determines which vehicle model is present based on the roof line height of the vehicle.

Since the BOS 18K is a retroreflective laser-based sensor, different levels of contrast affect the level of returning light to the sensor just as they would using a standard visible retroreflective sensor. This sensor has a precise spot size because the light is collimated by setting the retroreflective set points or teach threshold level; the sensor only responds to a given contrast level or the color of the car.

This color and model information is transferred to a PLC that in turns sends a job switching sequence to the four Sharpshooter vision sensors. Using this information, preprogrammed inspection tasks then are performed to determine whether the clips have been installed to specifications.

To analyze the clips present on each automotive body type, a reference image of the clip in the correct position and orientation is compared with a captured image using a pattern-matching tool from the Sharpshooter’s ConVissoftware library. This software compensates for any lateral or rotational variation of each clip that may occur.

Based on a percentage match, the clip is either passed or failed. However, because this pattern-matching tool could not be used to detect rotated parts, clips mounted 180° out of alignment could not be classified. Because of this, the pattern-matching tool was used in conjunction with an edge detection tool to determine that the clip was present but misaligned (see Fig. 2).

After each clip has been inspected, pass/fail data from the Sharpshooter sensors are then tracked for each individual vehicle so that a failed frame can be removed to a rework track before being allowed to proceed further.