When engineers at Targett Aviation decided to design their own single-seater, electrically powered aircraft, they turned to white-light-scanning specialists at Phase Vision (Loughborough, UK) for help. 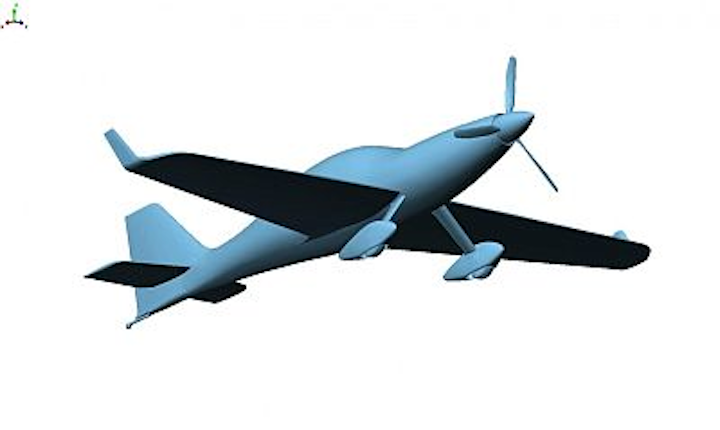 When engineers at Targett Aviation (Nympsfield, UK) decided to design their own single-seater, electrically powered aircraft, they turned to white-light-scanning specialists at Phase Vision (Loughborough, UK) for help.

To secure investment in its so-called "Rebel Electric Racer," Targett Aviation initially created a life-size proof of concept model. With this complete, the next phase was to capture an accurate representation of the entire aircraft and perform an analysis on a CAD model with the aim of optimizing the aerodynamic design.

Targett Aviation contacted Phase Vision,whose Quartz range of scanners can acquire millions of points to create a highly detailed point cloud in just a few seconds, even when contending with large and reflective surface areas.

A team of two Phase Vision scanning experts visited Targett Aviation and, using products from the company’s Quartz white-light-scanning range, scanned the entire aircraft within a few hours -- a total of some 250 scans that have since been "patched" and surfaced, ready to be analyzed through finite element analysis (FEA; for more information, see finite element method).

A Quartz 1200DBE scanner was used to scan the wings and fuselage because it is capable of measuring very large volumes -- up to 8 m3 can be scanned in a few seconds -- while the smaller details were scanned using a Quartz 800DBE, which filled in the detailed areas at much higher resolution.

Once the design is optimized through computational fluid dynamics (CFD) and FEA, the CAD model will be used to drive a five-axis router; this will create the molds from which the final aircraft will be manufactured. A full working prototype will then be created.