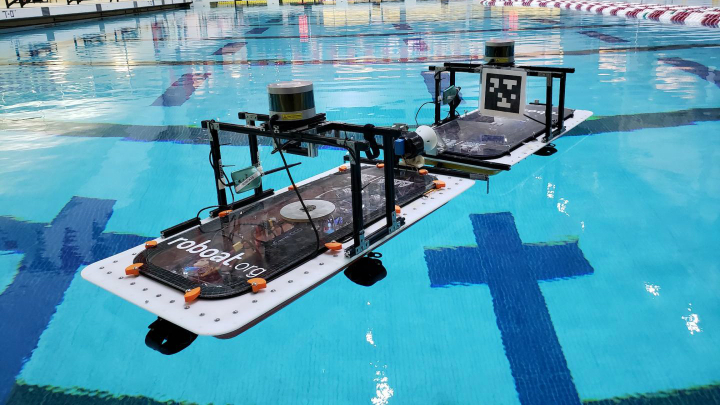 Figure 1. Two roboats practice docking maneuvers in a swimming pool at the Massachusetts Institute of Technology.

A 1997 concept from the American military for creating seaborne aircraft runways using unmanned, reconfigurable components has in 2019 become an initiative to create autonomous boats for enhancing civilian life in the canal networks of major cities.

Constructed in 2016, the first roboat became the basis for the 1000 x 500 x 150 mm, quarter-scale, 3D-printable versions currently used in research by MIT and the AMS Institute (Figure 1). Each roboat has a single thruster in the middle of each edge, an inertial measurement unit (IMU) for recognizing inclination and velocity, a VLP16 LIDAR system from Velodyne Lidar (San Jose, CA, USA; www.velodynelidar.com), a forward-facing (Santa Clara, CA, USA; www.intel.com) D435 RealSense camera, and an onboard computer with Intel i7 processor, 16 GB RAM, and 500 GB HDD.

The roboats are a far cry from the modular elements envisioned over two decades ago by early research into reconfigurable waterborne structures.

The individual modules would be semisubmersible and had an estimated cost of $1.5B each. A method for disconnecting and reconfiguring modules via a multi-module dynamic positioning system was referred for further study. In 2001, the Institute for Defense Analyses (Alexandria, VA, USA; www.ida.org) determined that other solutions were more cost effective and the MOB project terminated.

In 2014, researchers from the GRASP Lab and Department of Mechanical Engineering and Applied Mechanics from the University of Pennsylvania (Philadelphia, Pennsylvania, USA; www.upenn.edu), in partnership with DARPA (Arlington, VA, USA; www.darpa.mil), tested the concept of a Tactically Expandable Maritime Platform. The research paper that reported the experimental results (bit.ly/VSD-SAB), Self-Assembly of a Swarm of Autonomous Boats into Floating Structures, described the creation of 1:12 scale, modified ISO shipping container modules (bit.ly/VSD-ISO) with one water wheel-type thruster positioned at each corner of the boat.

The system developed at the University of Pennsylvania used fiducial markers called AprilTags (bit.ly/VSD-APR) for monitoring the locations of the modules. Like QR codes, AprilTags only carry between 4 and 12 bits of data for easier, more robust tag reading from long distances. AprilTags also are designed for high localization accuracy to enable the calculation of the precise 3D position of the marker with respect to a camera, making AprilTags useful in the field of robotics.

Each module bore a paper AprilTag read by one or more cameras mounted to a frame 3.7 m above the pool. The cameras attached via USB cable to a laptop ran an AprilTag recognition package named cv2cg (bit.ly/VSD-CV2) and monitored module locations at a rate between 20 and 30 Hz.

A central computer fed module position information to coordinator software that parsed blueprints for desired shapes. The blueprints fed to an assembly planner that controlled the docking order for the modules. A trajectory planner then set the required travel paths and transmitted data to the modules.

In testing conducted in an indoor swimming pool, the modules configured into a landing pad for a manually-piloted quadcopter drone and a bridge between two sides of the swimming pool on which to drive a remote-controlled car. 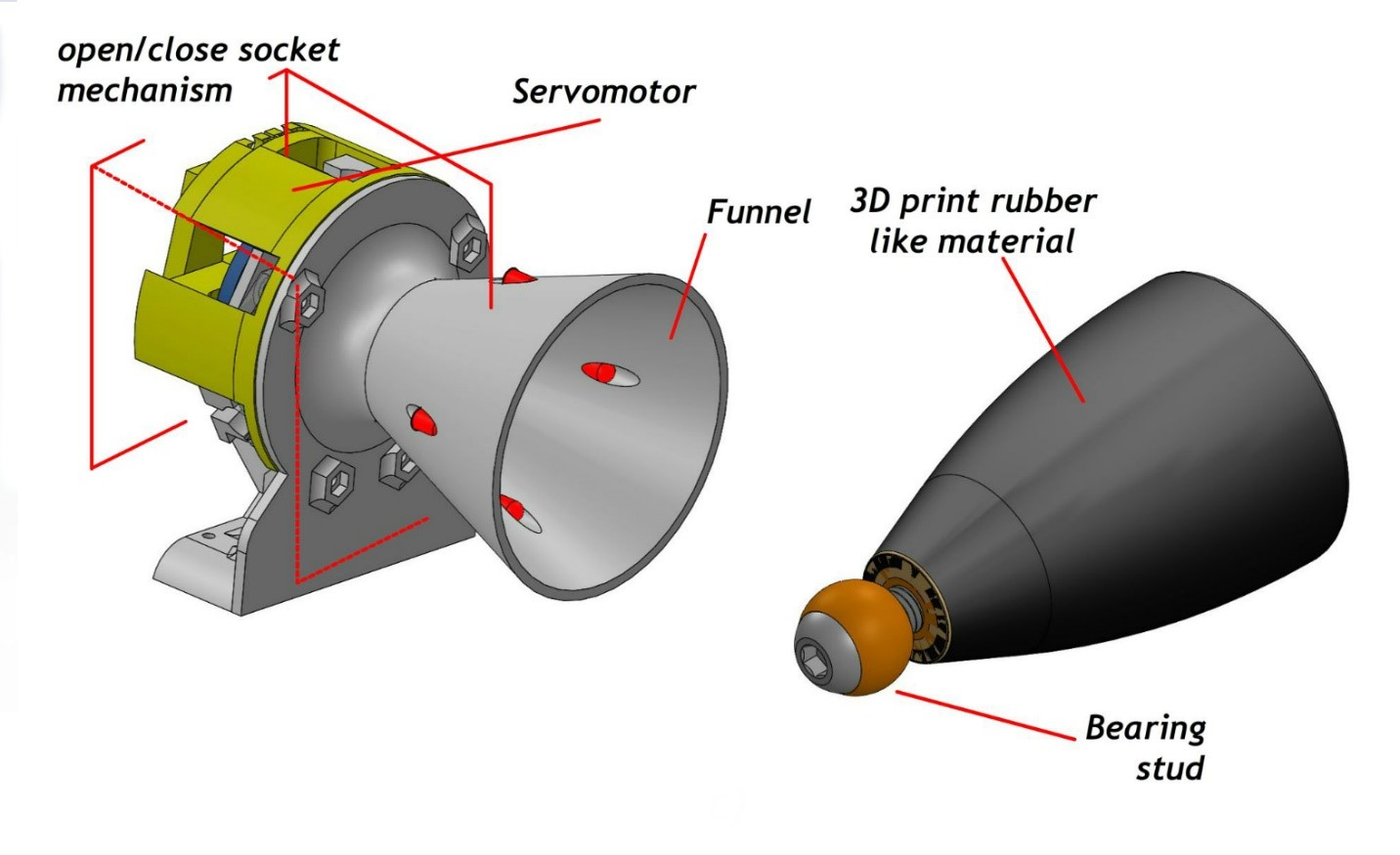 Figure 2. The roboats' docking system is designed to allow a high margin of error. The funnel helps guide the bearing stud into docking position.

“The University of Pennsylvania’s system relies on an overhead camera, meaning they use a centralized control strategy,” says Luis Mateos, a Robotic Researcher at the MIT Roboat project. “Each of our roboats is self-controlled.”

No movement commands are sent from a central control mechanism. The roboats act like a drone swarm, independent units that take collective action via communication with each other.

The Senseable City Lab researchers at MIT, currently focused on perfecting the ball-and-funnel latching system, use a pair of roboats for their research. One roboat performs station keeping maneuvers while the second roboat practices docking attempts, seeing one another via Intel RealSense cameras tracking paper AprilTags. The research takes place in a swimming pool on MIT campus and in the nearby Charles River.

Figure 3. The switch from paper AprilTags to markers displayed on LCD screens will allow dynamic communication within the roboat swarm.

Another ten of the quarter-scale roboats are under construction to begin variable configuration tests. These versions will have two LCD screens mounted on each side of the vehicle for AprilTag marker display (Figure 3). The roboats will also have stored in memory a lexicon of AprilTags describing any and all maneuvers a roboat may require for navigating into mating position with another roboat, to help form a specific shape.

“This captain roboat needs to be controlled/programmed by a human at some point,” says Mateos. For instance, a command might be broadcast for the swarm to take a specified shape at a specified location. This command may be transmitted via WiFi to any roboat in the swarm which then becomes the captain, publishing the information to the rest of the swarm to begin the chain of cascading docking maneuvers.

“If one marker is obscured by glare or the camera otherwise cannot detect the tag, then we have another marker,” says Mateos. “By knowing the angle between the tags, we can know how much certainty we have in positioning the roboat.”

Roboats forming pedestrian spaces must be flat. The quarter-scale roboats feature LiDAR scanners on a mounting bar running up and over the middle of the roboat. To solve this problem, Mateos says the researchers are imagining a system that functions like the roof on a convertible automobile.

Ideally, future iterations of the roboats will address the issue by not using LiDAR at all.

“Like autonomous cars, the roboats use LiDAR for localization and obstacle avoidance,” says Mateos. “What autonomous car designers are trying to do is only use cameras. The prices will go down, the systems will be less complex, but the artificial intelligence will be improved.”

The research team at MIT will at the end of 2019 begin construction of a full-scale roboat, which will have all the capabilities of the quarter-scale testbed roboats, with an expected completion date of 2021, according to Mateos.