In this week’s roundup from the Association for Unmanned Vehicle Systems International (AUVSI), which highlights some of the latest news and headlines in unmanned vehicles and robotics, learn about how researchers used an unmanned aerial system to collect data on monster storms in the Midwest, and how one company is developing a UAS for NASA to perform upper atmospheric observations" of the planet Venus.

In this week’s roundup from the Association for Unmanned Vehicle Systems International(AUVSI), which highlights some of the latest news and headlines in unmanned vehicles and robotics,learn about how researchers used an unmanned aerial system to collect data on monster storms in the Midwest, and how one company is developing a UAS for NASA to perform upper atmospheric observations" of the planet Venus. 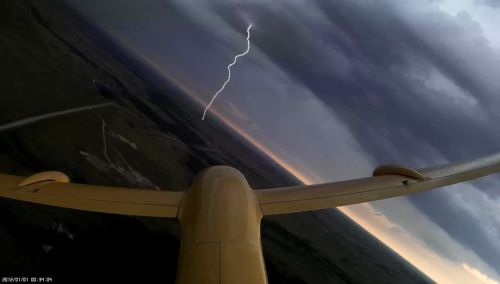 A team of aerospace engineers from the University of Colorado Boulder (CU) recently spent the first half of June traveling across the Midwest in search of monster storms.

During this time period, the CU team, which was made up of 16 CU employees and students, encountered a storm on June 8 outside Norris, South Dakota, and used one of its three "TTwistor" UAS to fly through the dark skies to collect data from the storm.

"It is amazing to me how you're driving along for several hours and it's nice, clear, sunny skies, and all of sudden you're under these clouds and it gets dark pretty fast," says Eric Frew, CU associate professor, via the Daily Camera.

Frew, who is also the associate director of technology at CU's Integrated Remote and In Situ Sensing (IRISS), drove one of the vehicles in a three-vehicle convoy straight towards the supercell thunderstorm outside Norris, South Dakota, and the TTwistor UAS flew above the convoy.

Equipped with the specialized UAS that they have spent years building and honing, the CU team met meteorologists from the University of Nebraska-Lincoln and Texas Tech University, who plan to use the UAS data to improve understanding and forecasting of tornadoes.

"It's still very much an open question of: Why does this type of storm become a tornado?" Frew says.

The three yellow TTwistor UAS that the CU team brought for these flights were built to collect the data requested by the meteorologists, including the pressure, temperature and humidity of the air and the speed and direction of the wind.

The UAS are built to take off from the roof of Ford Explorers equipped with special racks, and are programmed to follow the vehicles into storms.

The UAS are FAA-compliant, and the FAA requires a sightline on the UAS at all times. The storms are capable of moving faster than 30 miles per hour, so the only way to keep the UAS in sight is by driving with them.

According to Frew, UAS are the only way to safely collect the data that the meteorologists desire.

This was the first trip that a UAS was used to fly head-on into a storm.

The CU team drove each day—sometimes for as many as six hours—in areas between North Dakota and southern Oklahoma, and in the afternoon, they searched for the brewing storms. The June 8 storm in South Dakota was the most successful "good" weather mission during their two-week trip.

On the day of the June 8 storm, the CU team launched its UAS from the Ford Explorer. A small contingent drove in that vehicle, while the rest of the team stayed behind with a meteorologist and waited for the mission to end so they could help pack up the UAS and avoid the worst of the storm.

The Ford Explorer followed two other cars; one of which carried meteorologists who tracked the conditions, and another that acted as a scout car and drove about a mile ahead to keep an eye out for conditions that would damage the UAS.

"We just drove straight to the storm, and the storm came right to us," Frew says.

​Some of the footage picked up by the UAS' tail camera shows massive, dark clouds; a glowing blue patch where hail formed; and flashes of lightning. The group traveling towards the storm turned around when the scout car encountered hail, as the UAS cannot fly through sustained hail.

Now, the CU team will compile the data collected by the UAS and share it with the meteorologists for further study.

This initiative was the culmination of a three-year grant by the National Science Foundation, but Frew notes that their work and partnerships are ongoing, and anticipates continuing to learn and chase storms with them.

"These are measurements that the meteorology world wants, and you cannot get without being in the storm," Frew says. "That's the key."

Black Swift Technologies (BST) has been awarded a NASA contract to develop a UAS to perform "upper atmospheric observations" of the planet Venus.

BST is proposing a "planetary aerial vehicle based on dynamic soaring," which the company says is a "proven method to extract energy from atmospheric shear that has propelled the fastest small-scale aircraft in the world," and provided the energy needed for "long-endurance low-level flights of birds across oceans."

"While there have been a variety of systems proposed for upper atmospheric observations of Venus, the planet’s high wind speeds pose a significant design challenge," explains Jack Elston, Ph.D., CEO of Black Swift Technologies.

"Our solution will be designed to not only survive in the harsh wind environment, but also simultaneously perform targeted sampling of the atmosphere while continuously extracting energy, even on the dark side of the planet."

Because of the similarity in pressure and temperature of Earth, the upper atmosphere of Venus has been the focus of exploration for decades, BST notes.

Venus’ atmosphere is made up mostly of carbon dioxide and nitrogen, and its atmosphere is also much denser and hotter than Earth’s.

BST says that the upper layer of Venus’ atmosphere "exhibits a phenomenon of super-rotation, where the atmosphere circles the planet in just four Earth days." The resulting winds blow at speeds up to 220 miles per hour, but the wind speed becomes increasingly slower as the elevation from the surface decreases, with the breeze barely reaching a speed of 2.8 m/s on the surface.

"Black Swift Technologies has provided aerial solutions for wildland fires, volcanic observations, tornadoes, and hurricanes—some of the most extreme phenomena on Earth," Elston says. "This mission is a natural extension of our focus, only now we are concentrating on the extreme conditions of Venus." 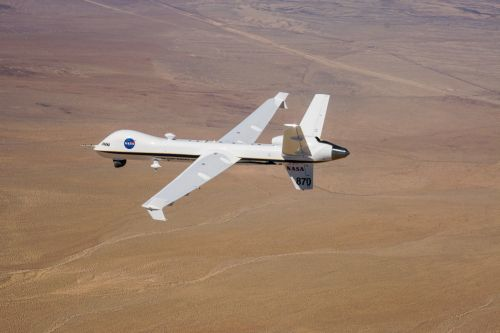 The DAA system, which was installed on a NASA-owned Predator B/MQ-9 UAS named Ikhana, allowed the UAS to meet the FAA’s 14 CFR 91.113(b) requirement to "see and avoid" other aircraft during its flight. The UAS took off from southern California.

"Our goal of producing UAS that can be certified to fly in non-segregated airspace took a big step forward today," says Linden Blue, CEO, GA-ASI.

"Today’s successful flight is testament to the strong relationship that we have with the FAA, NASA’s Armstrong Flight Research Center and Honeywell to produce the definitive standard for unmanned aircraft operation in congested airspaces."

The DAA system combines automatic collision avoidance with the ability for the pilot to remain ‘well clear’ of other airspace users. The DAA system has a variety of subsystems, including a GA-ASI-developed airborne radar, a TCAS II and DAA tracking capability from Honeywell, Automatic Dependent Surveillance-Broadcast (ADS-B) IN/OUT, and a Conflict Prediction and Display System.

"The predictive capabilities our system employs create a safe environment for manned and unmanned aircraft to fly together in the NAS."

Since 2013, GA-ASI has been working with several industry partners including the FAA, NASA’s Armstrong Flight Research Center and Honeywell to develop, flight test, and standardize an airborne DAA system.

GA-ASI says that flight tests on NASA's Ikhana "served as the basis for verification and validation of RTCA DO-365 and DO-366 technical standards for DAA," which were published by RTCA in May 2017. As a result, this has put GA-ASI on a path towards leading the industry in operating medium-altitude UAS in civilian airspace, the company says.

GA-ASI has been developing the DAA system with "internal funding for inclusion on all its aircraft." Particularly, the MQ-9B SkyGuardian UAS is provisioned to include the DAA system as a customer option, and GA-ASI’s MQ-25 offering also includes the opportunity for the U.S. Navy to incorporate DAA.

GA-ASI says that the DAA system for MQ-9B is designed to comply with the FAA-designated DO-365, "Minimum Operational Performance Standards for Detect and Avoid Systems."