In this week’s roundup from the Association for Unmanned Vehicle Systems International (AUVSI), which highlights some of the latest news and headlines in unmanned vehicles and robotics, learn about an unmanned aerial system (UAS) that will be used to test water quality in Ireland, Intel’s 50th anniversary—which include a record-setting drone light show in California—and testing of an unmanned refueling aircraft for the U.S. Navy.

In this week’s roundup from the Association for Unmanned Vehicle Systems International(AUVSI), which highlights some of the latest news and headlines in unmanned vehicles and robotics,learn about an unmanned aerial system (UAS) that will be used to test water quality in Ireland, Intel’s 50th anniversary—which include a record-setting drone light show in California—and testing of an unmanned refueling aircraft for the U.S. Navy.

In Ireland, UAS are going to be used to test water quality in western lakes.

Scientists at Galway-Mayo Institute of Technology (GMIT) believe that UAS may be able to extend the range and quality of testing, while lowering labor costs and avoiding safety issues on more exposed and inaccessible waterways.

The GMIT Marine and Freshwater Research Centre has secured €132,000 (more than $154,000 in US dollars) in funding from the Environmental Protection Agency (EPA) for the project, as part of its lake monitoring program.

Under the EU Water Framework Directive, Ireland is required to monitor the health of its inland waterways, so water chemistry scientists will work with several parties on the two-year project, including lake biologists, engineers and licensed UAS pilots.

According to Dr. Rick Officer, GMIT vice president for research and innovation, the GMIT Marine and Freshwater Research Centre has already begun using UAS for environmental monitoring, but this will be the first research of its type on water quality sampling.

The project will involve installing separate communication technologies on UAS, with transmission of "real-time underwater camera images and data" to flight operators.

According to GMIT, all members of its research team have successfully completed drone flight school training. Additionally, industry partners MHS are fully licensed to operate UAS up to 25 kilograms in mass. 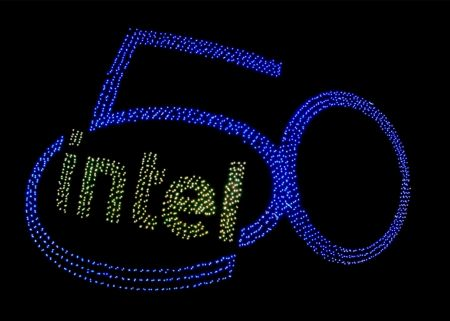 "Several years ago, we had an idea of flying drones forming the Intel logo over our corporate headquarters, and here we are doing just that," says Anil Nanduri, vice president and general manager, Intel Drone Group.

"It really speaks to the innovative spirit that Intel was founded on 50 years ago."

From July 18 to 22, weather-permitting, Intel will also celebrate its 50th anniversary by flying 500 of its Shooting Star drones over its corporate headquarters in Santa Clara, California.

Those light shows will be in honor of Intel’s employees and their families. 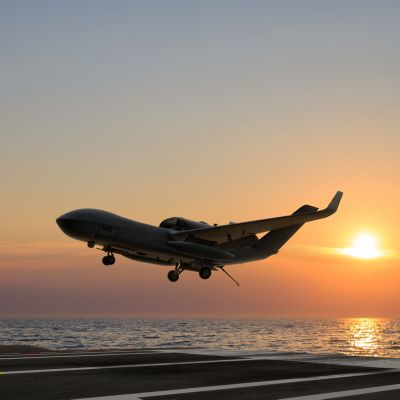 GA-ASI worked with a team from GKN Aerospace’s Fokker business unit in Helmond, Netherlands. Fokker is scheduled to supply the arresting hook for GA-ASI's bid.

"The validation of this model gives us confidence ahead of production and eventual deployment. This is part of our ongoing effort to reduce risk and accelerate capability for the Navy."

The test simulated dynamic conditions providing performance characteristics of the HDD, such as damping, spring rate and pressure control functionality. GA-ASI says that the test results "validate modeling tools that provide quick reaction capability for completing the design and manufacturing during the Engineering and Manufacturing Development (EMD) contract."

The model verified important requirements for HDD performance testing with positive results in a variety of areas, including initial bounce, upswing and rebound, and bolter at nominal, cold, and hot operational temperatures. Additionally, the preliminary design also validated construction and manufacturing methods for production use.

GA-ASI notes that validation of damper modeling and construction methods in this test "mitigates technical risks," and met the goal of lessening the development schedule and cost of arresting hook during the MQ-25 program’s pending EMD phase.